The Transfer Window, In Review

Share All sharing options for: The Transfer Window, In Review

The transfer window is closed and the players are working out with their new teams. Manchester City has snapped up every player they could get their hands on, and the other three of the big four have spent their traditionally large amounts of money. Some clubs consider themselves haves and some have-nots, some owners are frugal and some are downright miserly. We who support NUFC started the transfer window with low expectations as Mike Ashley proceeded to repay himself a loan he gave the club that he owns. But, hope springs, with a bit of interpretation, that is, when we were told that the club’s approach to the Transfer Window would be a time of "Prudent Ambition." Some read this as another way to say, "We aren’t going to be spending any money," but I read it with a bit more optimistic tone. You can’t expect a club that has only just come back from relegation to break the bank to get back on top, but you’d like to see something be done about staying around in the Premiership, wouldn’t you? Well, that’s how I read it. We were set to look for quality and more than that value. It would take a deft touch and some sly maneuvering, and Chris Hughton would have to be on the very top of his game.

Perch transferred in from Nottingham Forrest (there’s a Robin Hood gag somewhere in there, but I’m not digging it out) for a nominal £1.2M fee, signed immediately to a 4yr contract; and, over the first three games in the Prem, proved to be a quality signing. That’s before you even consider that the player’s versatility. He’s only played Right Back (played it well for that matter) for the Magpies but he is able to play across the back four, Defensive MF and Right MF. Except against Manchester, when the side was frankly run ragged, the defense has looked great, and James Perch has been a big part of that. Have to give Hughton high marks for this one. Grade: B+ 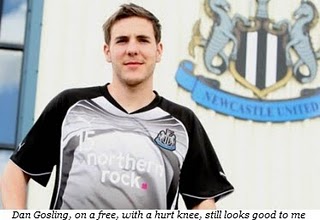 While he’s recovering from a cruciate ligament injury, Hughton was able to snap him up as a free-agent and sign him to a four year deal. We have to reserve approval until we see how he holds up after the knee heals, but we can also say how confident we are that he will return to form, and when he does we will be impressed as he continues to grow into the player that his career thus far has foreshadowed. Also we can give CH more high marks in not only the signing but in the high road attitude he took after the Everton brass started whining and bantering at Gosling’s agent. Hughton was quoted saying, "We are one-hundred per cent sure that we’ve done everything appropriately," which just goes to show, if you work above board as a rule, then you never have to answer for shady dealings. Grade: A- 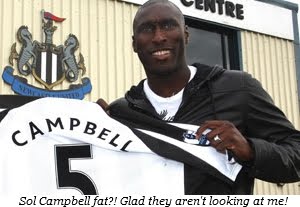 A 35 year old veteran signed on a free transfer. For most a first glance says, "Meh, let me know when the real signings start," but hear me out. In almost every sport I am a fan of signing a veteran who’s just shy of over the hill and has experience in winning. In any sport the players have to be students of their game to play at the highest levels. They start by learning the basic skills, then, as they master those, they pick up an understanding of strategy and style, and so on. But, one of the major subjects of study that is often overlooked is the subject of winning. A player must learn to win, and it is always good to have teachers around that know how to do it. That said, signing the veteran just shy of over the hill, carries with it the risk of walking beside him over it. Some would have you think that this is the case with Sol, proved by his lack of fitness to start the season, but let’s give the fellow a break; he is just off his honeymoon isn’t he. He’ll be fit soon and he will bolster the defense and he will play the season satisfactorily, mark me on it. Another piece falls into place and the critics’ numbers start to dwindle, resorting to the laughable position of calling poor Sol fat of all things. Grade: A 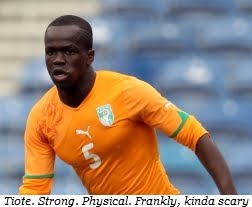 Tiote has come from Twente for somewhere around £3.5m, and it kind of came out of nowhere. The rumor news had been about a striker, the ongoing Ben Arfa story, and turning attention toward Manchester City’s leftovers. Then, bang, Cheick Tiote on Tyneside for a medical. I know hardly anything about this cat, as the Eredivisie is not on my regular viewing schedule, but what I have been able to find out is that he is a Defensive minded Midfielder that brings a strong physical presence to the pitch. That will spell Alan Smith at DMF, who’s really more crafty than imposing at any rate, so it’ll be nice to have someone in midfield that people don’t want to cross. At this point we’re starting to think that the Transfer Window is shaping up nicely, and we’ve only spent £4.5-5m as far as we can tell from reports. Looking pretty good CH. Grade: A 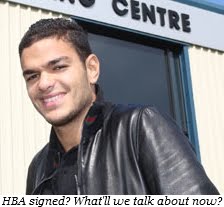 Finally on the 28th of August, the team site confirmed officially that we had indeed captured a loan deal for Hatem Ben Arfa from Olymipque de Marseille for £5m, with the added stipulation that if he plays 25games then he’ll be bought outright for around the same price paid again. This signing is brilliant and we have been of the opinion that it would indeed end up the way it has. It’s our theory that OM was feeding stories to the media about alternate interests to drum up a market for the player and drive up his price, Hughton and company, showing unequaled deftness, simply didn’t flinch. It helped that the player himself decided to have a hold out to force the move. At any rate, Arfagate is over and the player is in Newcastle. He’s been billed as an attitude problem, but CH is confident in his ability to manage all the personalities on the club. As far as playing goes HBA should bring just the type of creative spark the MF needs to be effective offensively. From videos I’ve seen he’s certainly a greatly talented ball handler, and seems to have a good nose for where to be and when. With this signing in just before the Wolves game, CH had seemed to be fast winning the respect of the Toon Army, and all that came to a head with a respectful chant of "One Crissy Hughton" from the small delegation to Molineux. Grade: A+

Then, while Hurricane Earl rolled into our eastern coast, the window closed, unceremoniously to be frank, and the hurricane whirlwinds that we expected turned out to be more like breezes. The Magpies were said to have been in on a few players at day break, and of course rumored to have players checking into hotels in Newcastle and such, but here at the end none of them quite panned out. As it turned out Robbie Keane didn't really want to come to Tyneside, and if that's the case, we're better off without him. Wolfswinkle decided to stay home, so we'll be pushing forward with the existing Striker crew. Which is fine with us, we don't see any merit in all the grief that Shola Ameobi is subjected to. We we're hoping for cover for Jose Enrique, but loans could certainly sort the LB cover out. As we look back on the Summer Window, we can't help but be pleased. One Chrissy Hughton is showing us all what he's made of, and it's good stock if you ask us.