CHN Links: Monday, Monday, So Good To Me

Share All sharing options for: CHN Links: Monday, Monday, So Good To Me

Goedemorgen, Toon Leger! We're speaking Dutch today to reaffirm young Tim Krul that even if NUFC manages to convince the PL of an emergency loan for Shay Given (which shouldn't prove difficult), we think he should be our man and Given can sit second. Also we look at injuries, reactions from Saturday's joga bonito match, and get into the Carling Cup match with Chelsea, FC all that and more post jump. 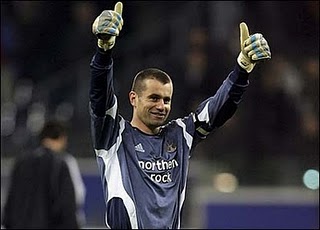 We're ready to welcome back Given, but he'll need to ride some pine to make us happy.


First up the best update on the Harper injury we can find is from PhisioRoom, calling it a broken collar bone. But the Northern Echo is still calling it ligament damage. Either way, we're sure that doesn't sound like a short timer injury, not to mention that Tribal is reporting the club showing great interest in in Shay Given. The Mirror is reporting the same, and since Mancini is willing to let him go, we're willing to see him in stripes again.

If you haven't seen the post game interviews, Toonsy has gathered them all up for you. We read lots of Chris Hughton quotes, but listening to him talk about his team is a real treat.

It looks like though the Prem points are his main focus Hughton will be fielding a team that can compete for The Carling Cup when we head to Stamford Bridge on Wednesday. Look for our match preview by Robert soon.

Guardian.co.uk is late to the game on the match review front, but they have some good stuff from Moyes.

Howay the Lads! Bring on Chelski!