Match Preview: On the Road at Goodison Park

Share All sharing options for: Match Preview: On the Road at Goodison Park

The Toon will travel to take on The Toffees tomorrow. With the 2500 allocated seats all sold will our lads be able to steal away their first away win? Will Hoots do what he has alluded to and put the same starting eleven on the pitch again? Discuss it with us after the jump. 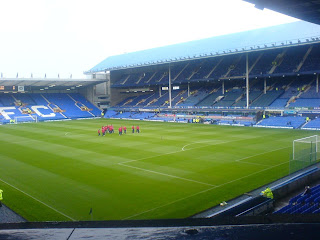 When The Grand Old Lady plays host, will Newcastle be able to earn points?


First up, injuries. We thought that Guthrie might be ready, but he'll be staying out with rest of the injured: Simpson, Taylor, Gosling and Best. Xisco will serve the first of his three game suspension. So the lads available to CH is the same list that he had last week. Some are of the opinion that he may have implied that his starting 11 won't change in the following:

"It’s vitally important not to over-react to the defeat," "It wasn’t one of our best performances but we’d be happy going into future games creating the amount of chances we did against Blackpool.

"So we certainly feel there are more pluses than minuses in those games but, of course, it’s about gaining points."

"You always want players knocking on the door and you want a group of lads who want to play and who’re disappointed when they don’t play,"

"What we said when the window closed was we wanted to have a squad that gave us decisions to make regarding the team selection and that is what we have."

But we are of the opinion that this is more of Hughton's quickly becoming signature style of playing his hand close to his chest so we won't be guessing about the starting eleven this week. He gains nothing by tipping that hand at this point, so we think he simply isn't. If you don't get stuck on whatever overtone is making people think there will be no changes in the starting squad then you have to like the other things he has to say. We know it's all coach speak and it's all stuff one would expect to hear, but it also serves to increase our ever-growing confidence in the man at the helm.

With the Everton off to a rough start we think it isn't out of the realm of possibility to walk away with all three points from this one. But, we also think that calling for that kind of outing would be recklessly optimistic. If we can produce any where near the same volume of chances that we did against Blackpool, and this time around sort out a way to have some go our way; we would however, feel comfortable forecasting a draw.

Ref: Andre Marriner (Birmingham). Last seen taking charge of United's 0-0 draw at Leicester City in January. His last three top-flight games involving Toon games were all at SJP; Defeat to Hull, draw with Wigan and win over Spurs. (Stolen again from NUFC.com, thanks.)

On the TV: In the US you'll need to be a subscriber of Fox Soccer Plus or FoxSoccer.tv, Or you can tune into the usual suspects of live streams, ATDHE and MyP2P.