Your NUFC went into Stamford Bridge and after six minutes what everyone had predicted would come to pass seemed to start coming true. This years run at the Carling would be over for the Magpies, and hey, no big deal the Premiership points are what we're after in the first place. Chris Hughton had made 10 changes to the Newcastle side that won against Everton, it looked like concession, but he insisted this team was looking for a win. After only six minutes it was looking even more like concession. The Chelsea side wasn't a first team by any means, but Anelka, Ramires, Ferreira, Alex and Terry were there, wait didn't we just say it wasn't the starters? Well, we were half correct. At any rate, after six minutes it seemed like the Chelsea half squad would do exactly what everyone thought they would. But, then, somewhere in the teen minutes something changed. Passes started crisping up, build ups started actually building up, the defense solidified, and at Twenty and Seven minutes, Shane Ferguson put in a cross that looked intended for Peter Lovenkrands. It cleared just inches above his head and was headed out of play, but for the streaking and sliding Nile Ranger, who struck true on the back post side. The last time that happened at Stamford Bridge in competition was March 27, 2010. 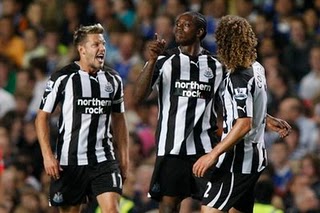 Nile Ranger- "The best possible way to reply was to score, so I was pleased to stick it in the net."


Then, wouldn't you know it, the lads kept it up. Passing effectively defending strongly, attacking vigorously. And, wouldn't you know it, it paid off. At 32 minutes Shola Ameobi was brought down a few yards outside the box, and Ryan Taylor, being somewhat of a set piece specialist, blasted one right through the wall that was money on the near side (he later blasted one at goal from a free kick given a few yards on his side of midfield too so..., yeah, let's move on). Everything seemed to tighten even further, this team of second stringers dominated the better part of 30 minutes of that first half, and in extra time Shola hit home from just outside the box, and they went to the changing rooms up 3-1.

The second half started in much the same way until Chelsea found a renewed vigor in the blatant misses of both Lovenkrands and Ameobi, and, of all things the loss of Yossi Benayoun, whom they could not replace. At that point the announcer we were listening to started gushing about how amazing it would be to see Chelsea come back with a man down, and how Chelsea was just the side to do it, and how Newcastle would really regret missing those two goals they had in their hands. It didn't seem a biased approach at all.... But, with only 10 men on the pitch, Nicolas Anelka set about dragging his side back into the match. Which he did at 70 minutes off a van Aanholt cross that was only made possible by the lone mistake we saw from Sol Campbell in the game. He was dribbled 'round and left 15 yards behind the play only to watch van Aanholt make his cross completely uncontested.

The lads still seemed up to the task of holding on to their lead for the last 20 minutes until, that is, in the 87th minute. Either out of some misplaced sense of pity, or fear of unpopularity in being the man that called a Chelsea defeat, Referee Phil Dowd awarded a penalty of which Chris Hughton had this to say:

''I didn't think it was a penalty. That is an understatement. It disappointed me because at that stage we hang on and win 3-2. If we had not got the winner and it had gone to extra-time, it would have been a travesty."

We couldn't see the wrongdoing either. It was marginal at best. Diabolical at worst. But, whatever it was it was called, and it ended in Chelsea tying the game. With just a few ticks left we earned a corner that Gutierrez took to a chorus of jeers from the Chelsea crowd. He shut them up with a picture perfect corner to the head of Ameobi, who nudged it past to reclaim the lead. At that point we thought there would be no time for Dowd to give the game back to Chelsea again, but we forgot that time is exactly what he could give them. Six minutes, SIX minutes, of overage he called for, but our boys were up to the task.

Our Man of the Match: Shane Ferguson