Going forward, we will be publishing two match reviews each week: one pretty soon after the match that will mostly concentrate on the story, and one at mid-week that will mostly concentrate on tactics. Since we had a two week break, we held the first mid-week review until today. We of course solicit your suggestions on how to improve this and other features here at CHN.

Going into this week's match against the Wolves, Chris Hughton didn't have very many decisions to make. His squad had just gotten done thrashing Aston Villa 6-0, so there was little question that he would trot out the same Starting XI and the same formation.

In the 4-4-1-1, funneling crosses into the middle is key. You won't see the Magpies take very many shots from strange angles, and this week was no exception. Nearly all of the 13 shots taken were close-range shots from the middle of the box created by long-range crosses from the outside. Unfortunately, the only ones getting through were coming from the right side, as Jonas Gutierrez and Jose Enrique were completely shut down on the left by Kevin Foley and Jody Craddock. Wayne Routledge, on the other hand, was extremely dangerous. His pace was troubling to the Wolf midfield and defense, and he came very close to connecting with Kevin Nolan twice. Routledge and Nolan were supported by Joey Barton who overcame several malicious challenges to be an offensive threat as well. Also supporting effectively was James Perch, who himself swung an effective cross to Andy Carroll that he was unable to get a good touch on. Carroll was a bit of an enigma. His goal on the Barton set piece made up for his egregious miss toward the end of the first half, but one can't help but wonder if it should have been a final of 2-1.

Defensively, The Toon were solid once again, save for the one lapse that led to Sylvain Ebanks-Blake's spectacular goal. There's not much to say about Steve Harper; the only shot that Wolverhampton got on target was the aforementioned goal, and there's not much you could have expected Harper to do in that situation. Perch did his best to play the ball, but with a striker to his right you can understand his hesitancy to get in front of the shot. It does seem that Mike Williamson might have been a tad bit out of position, but I think you can chalk the goal up to Ebanks-Blake simply exploiting a small gap. Aside from that momentary lapse, the only other moment that seems to stand out is the Perch tackle in the box that wasn't called. It was a risky move that paid off, but it wasn't necessary and he would do well to avoid dependence on the referee's generosity in the future. It should be mentioned that Alan Smith did well in support. He won several 50-50 balls and made key tackles down the stretch. 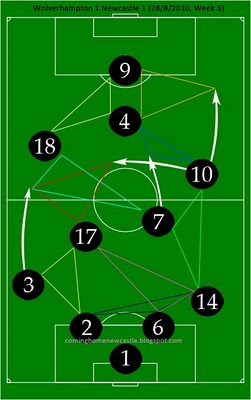