Top of the morning to ya, Toon Army.

Will today finally be the day we can start looking forward to Wigan and cease with the banter ad nauseam over the De Jong/Ben Arfa scandal? Probably not. We're as angry about the debacle as any one, right, but at some point we're going to have to realize that crying over spilled milk does no one any good. There's still a bit more of that on the table, but we'll try our hardest to move forward. 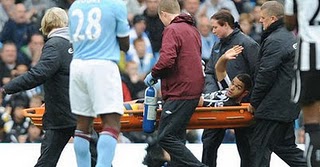 Can we wave goodbye to this scandal yet?


Caught Offside and JournalLive are both running with the OM legal action story, though neither are adding much to the conversation.

Coloccini is better and this poses a bit of a dilemma for One Chrissy Hughton. Both SkySports and ChronicleLive have stories up in this regard. Look for our match review later in the week for our opinion on the matter.

Speaking of lineup dilemmas what are we going to do with the strikers? Ed wonders aloud if we should pop both Ameobi and Big Andy into a 4-4-2 setup for the game against Wigan. Loan rumors are starting to buzz around Xisco and Nile Ranger. SkySports wonders if the young Spaniard will be loaned out to further his development since it seems he won't be getting first team minutes any time soon. And Toonsy writes that our youngsters Ranger and Vuckic are likely to stagnate if they don't see first team action of some sort.

If you like Timmy Krul, and we do, you'll like this Miles Starforth piece. (The Shields Gazette)