Good morning, Toon Army. It always feels weird when football is being played on a Saturday but you don't really care about any of the teams. Hopefully our patience will be rewarded with a decisive victory. 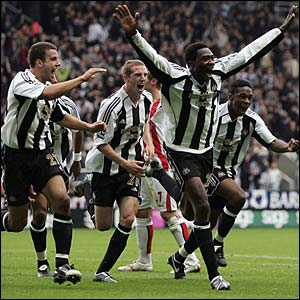 Shola Ameobi celebrates after scoring a goal in a win against Sunderland on October 23, 2005.
Photo credit unknown, pulled from bbc.co.uk

The rumors keep pouring in about Chris Hughton's job (in)security, and Newcastle players and people knowledgeable about football keep supporting him. Kevin Nolan says the rumors are "absolutely ridiculous." (Sky Sports) Marc Duffy of ESPN Soccernet says that Hughton has defied expectations. Mark Lawrenson of MirrorFootball says, among many other things, "[F]or his job to be on the line is scandalous." Surely Mike Ashley is hearing what smart people are saying. That "vote of confidence" isn't really the kiss of death, is it?

Former Black Cat Danny Simpson is prepared to hear boos from the away allocation on Sunday. (Lee Ryder, The Chronicle) He went on to say that Newcastle are a "bigger club" than Sunderland and made a few other choice quotes that could be considered bulletin board material on Wearside. (Steve Brenner, The Sun)

Joey Barton doesn't want to gear up for the Derby - he wants the team to be patient and build on what they did against West Ham. Smart man. (Lee Ryder, The Chronicle)

Kevin Nolan has never been part of a victory against the mackems, and he's anxious to get that win under his belt. (Lee Ryder, The Chronicle)

Shola Ameobi was a Tyne-Wear Derby hero once upon a time, and he says he's up for it again. (Lee Ryder, The Chronicle)

Wayne Routledge has been part of many Derbies before, but he says nothing will compare to what will be his first Tyne-Wear Derby. (Lee Ryder, The Chronicle)

Haris Vuckic could be loaned out to a Championship caliber team in January. (Mark Douglas, The Journal)

Local police have formally warned fans of both teams that violence will not be tolerated this weekend. (BBC News)

MirrorFootball has a rather humorous article about Kevin Nolan disciplining Andy Carroll while staying at his house. Ben Hunt of The Sun has some more details. All of this gives me an excuse to link to this Twitter account.