Despite the title, or in spite of the title, good morning, Toon Army.

As you may have seen in our breaking news update, Andy Carroll has been charged with assaulting an ex-girlfriend, and glassing some poor Joe. Glassing is a word I didn't know as a verb until yesterday. Oh well, learn something new every day.... 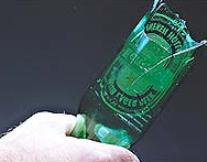 I'm pretty depresed that I had to hunt down a picture of a broken bottle being wielded today...


On the topic of Wor Little Andy, The Mirror reports that he was bailed under the stipulation that he live with Skipper Kevin Nolan. His former address was a hotel....

Yes, the same skipper that sat out against Wigan. In the Mirror, Chris Hughton debunked all speculation saying that Kevin needed a rest from playing with some minor nagging injuries, and that a rest was all it was. ChronicleLive is spinning the same wet of quotes to read that Kevin Nolan must prove fitness to Hughton. Well he obviously doesn't want the lad playing hurt, but I think this headline is a bit heavy handed.

Colin Calderwood has left the Toon. We would have offered this as its own story but we're late on it being across the pond. Both BBC Sport and Chronicle Live have pieces up about it, the former has a video of the press release Q&A.

I think we can all agree that Coloccini's celebration of the last second equalizer was pure passion. Talking about it in the days following Colo has dedicated the goal to his late mother. A beautiful sentiment for a beautiful goal.

Finally, Chris Hughton is looking to loan out Leon Best to get some first team action, and Crystal Palace may be the front-runners. (PEOPLE.co.uk)