The away allocation in Manchester City Stadium is sold out to see The Citizens take on the Magpies. We hear that Hoots will leave the side unchanged, again. Given the roller coaster ride that the season has been so far for both of these clubs we expect; well, we don't know what to expect. One thing that has been constant for our side at least is a fighting spirit and we expect that, at least, to continue. That give Newcastle a puncher's chance, doesn't it? 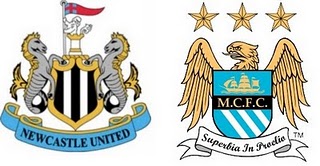 Headed east, well to the Eastlands at least.

The side may stay the same, but if Hughton were taking our requests we'd see Ryan Taylor get a start, but he'll probably be looking to have Perch back on the horse as they say. But Sol Campbell is also fit so who knows how the back 4 will shape up. We'd like to see something like this:

But we'll probably see Tiote for defense and HBA in place of Jonas, and Nolan in the CAM. The back 4 will more than likely remain unchanged.

Obviously Steve Harper is added to the injured list of Guthrie, Gosling, S. Taylor, and Simpson, and though Xisco is back from suspension we think he won't feature, even on the bench. On the ManC side, Balotelli was said to be a hopeful for Sunday, but it looks like he won't be fit. And their other injuries haven't changed.

This tie should be an uphill battle for our lads and unless ManC has the kind of meltdown they are destined for after buying up every footballer they get a whiff of. Even then it might prove difficult as The Blues have had our number recently, especially at home. It's probably too much to hope for a point from this game, so we'll have to hope for just a goal.

Ref: Martin Atkinson (West Yorkshire) a quick return to Magpie action for this whistler, who took charge of the 6-0 home victory over Aston Villa last month. Thanks NUFC.com.

On the TV: Tune in to FoxSoccerPlus to see the lads in HD. Otherwise check the usual suspects for streams. Follow us on Twitter and we'll keep you updated as to which stream is working best.