Share All sharing options for: Non-League Week: A Look Forward

Normally we'd take in a local match during the non-league week. In a way, we will be as out Texas Ranger enter the MLB post season, we'll be on hand for Saturday's game 3 of the five game series. But as footy goes this week, we look forward. After seven games, Newcastle has seven points, four from home and three on the road. The team has shown flashes of pure brilliance as well as falling absolutely flat at times. Let's take a look at our next seven games and make some predictions about how we'll sit in the table as December creeps close and just before Chelsea rolls into town for a league match. 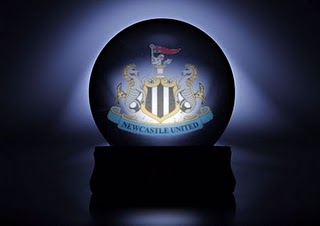 Nice Graphic huh? I predicted that you'd love it.


10/16 Wigan Athletic FC (H): If we were to loose this game at home, I'd have to start leaning toward the worried side of the fence. That said I don't think there is a very large chance that we do lose this game. Wigan has shown they can play, ask the Spurs, but the overall feel of the club is one that is struggling to compete at this level. It seems the side hasn't improved much from last year's, which ended them six points shy of relegation. They have been able to beat Spurs and Wolves, although Tottenham perennially looses a home game to a crap team, and Wolves have seemed to tone down their aggressive approach since they've been a bit called out for it. This is the game when the lads will learn again that in the Prem you have to come to play every week, they stop coasting through the second halves and start putting away the teams they should beat. So my prediction is NUFC 2-1 WAFC.

10/23 West Ham United FC (A): WHUFC is another that narrowly avoided relegation and hasn't seemed much improved. More like WHOFC. I say that tongue in cheek, but the only high point of their abysmal start has been a win at home against Spurs. I actually don't think this team is the worst in the league though the table says it is. A very difficult two months of scheduling to begin the season has put them their. The problem may be that they don't have quite enough to climb back out of that hole. When we go to Boleyn Ground, I predict we'll be there to shovel more dirt in on top of them. NUFC 3-0 WHUFC

10/27 League Cup Arsenal (H): This piece is mainly about the Prem. This match will depend in large part on how seriously Arsenal are taking the League Cup. Another League Cup shocker like Chelsea would be nice though.

10/31 Sunderland AFC (H): The Mackem unwashed have had a strange start to the season, forcing Draws left and right. Well in some cases forcing draws in others conceding them. They've also shocked Man City with a 1-0 win and are out of the cup with a loss to WHUFC, so they won't have that to deal with before they come to SJP. We're hoping that coming off two league wins with the The Toon Army out in full at home that the lads will be taking care of business, and putting the unclean in their place, but we'll be coming off the Carling Cup game so no blow out. NUFC 2 - 1 SAFC

11/7 Arsenal (A): The Gunners have handled themselves very nicely thus far, and I'm afraid they will continue to do so. They would sit even higher on the table except for an loss to the strangely effective Albion team. But when we roll into Emirates I expect a loss, a hard fought loss, but a loss. Perhaps we squeak in a goal, but in the end I think we'll be overpowered. NUFC 1-3 AFC

10/10 Blackburn Rovers FC (H): Of these two home games in quick succession with the Arsenal game I expect a win on home advantage and a tie. I think coming back home and bouncing back from the loss at Emirates will find Rovers tasting our wrath. The Rovers are a middle of the road club that have played middle of the road ball to start the season. You'd think they'd have been able to build on that opening win against Everton, but they didn't. Nothing special about them and they'll be lethargic on longer rest and a win against Wigan. NUFC 2-0 BRFC

11/13 Fullham FC (H): Another middle of the road team that has been able to produce a pile of draws. As the back to back nature of the last three games starts to tire out our squad I look for FFC to be able to produce another draw here in a low scoring affair. With that said I'm also wary of the chance that we let all the points slip away in this one. I said we'll be tired, and that probably means fielding a pieced together squad. That has the potential to cost us, but I have faith in Hughton's ability to field a reliable team. NUFC 1-1 FFC

11/20 Bolton Wanderers FC (A): On a full week of rest against a team that has banked on producing draws, I like our chances in this one. A lot can happen between now and this Bolton match so at this point I'm really reading the tea leaves. I'd like to see a win on the road at this point in the season but I think that even on good rest and having some lads back from injury, we'll be looking a possible loss. I think Bolton win this with a late goal at home. NUFC 2-3 BWFC

So there it is. I predict that after fourteen games our lads will have 20 points. I really think the Wigan game may be a focal point for this season. It is as "must win" as we've had this season and if the Toon can come out of that one with all the points I think we'll be in for good times over the next several weeks.