After the Chelsea game in the Carling Cup, we had a mantra about what had happened after just six minutes. Six minutes gone at Manchester City saw Nigel de Jong tackle through the ball in unnecessary fashion into the standing leg of Hatem ben Arfa. We cannot comment on his intentions, but his left foot was toward the ball and his right leg was bent and lifted higher than one would expect, resultant in it being about calf high on HBA's weight-bearing leg. One cannot quite call the tackle dirty, though it smacked of the intent to make a statement, the sort of tackle by letter of the law legal, but in spirit is malicious. Whatever his intentions, when ben Arfa was stretchered off the field, every Manchester City player applauded, except one.... The fall out has seen that ben Arfa has suffered a double break above the ankle. He'll be out for months. 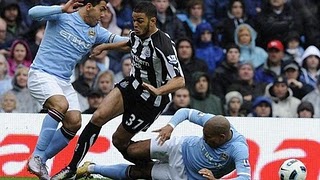 This sort of play needs to be weeded out of the Premier League. Thanks ABC Deportes for the photo.


Bad went to worse when Williamson was wrongly called for fouling Tevez in the box. Our two contentions echo those of Hughton himself, 1) Williamson got a piece of the ball, and in fact played the ball not the man, and 2) the ball simply wasn't in the box. The fact that Martin Atkinson didn't show the red card, which is what that situation usually dictates, tells us that he may have had some notion of what kind of refereeing he was doing. At that point we remembered that Atkinson was also the man that gave Villa that soft penalty in the early stages of that game at SJP. But, as too usually is the case, the system bows to talent and money and reputation, and Williamson had produced the penalty shot that Tevez drove home with power, even though Krul did get a piece of it with his knee.

Despite the early setbacks, NUFC stayed with the game-plan: playing the back four very high and inviting ManC to take long passes forward, which they obliged with very little success. Cheik Tiote held down the midfield with great class. The man must have touched every blade of grass on the field, and didn't put a foot wrong so far as we could tell. Jonas Gutierrez went to work exposing David Silva, which he did to great effect when on twenty-four minutes he walked in, crossed to Ameobi, who popped the ball up into open space that Jonas quickly occupied and drove home across the face of goal. Seemingly inspired by the early mishaps, Newcastle were going to make a game out of this.

The first half continued in much the same fashion. Newcastle controlled the ball and the pace, occasionally giving way to a long pass that wasn't offside, but handling those situations well. Krul was virtually untested, but when he was he was spot on. Though ManC seemed to think that they would be able to get away with just about anything, the refereeing seemed to straighten out as Atkinson showed yellow cards at will to keep the play under control. The only other event was a groin tweak for Coloccini that would see Sol Campbell become only the second player to have played in every season of the Premier League (Ryan Giggs is the other). Sol looked very good on the day, taking immediate control of the back four and organizing the defense very well.

The second half brought much more pressure from the ManC side, but they continued to show that they are a melange of talented pieces, with still very little cohesion as a team. Barry went off to make way for Adam Johnson and Mike Williamson had his second bit of misfortune as Johnson sent in a screamer right between his legs to the far post. Krul hadn't a chance at it.

With just fifteen minutes left, The Toon could have rolled it in and accepted fate, but Hughton wanted his point. With his final substitution he sent in Andy Carroll to muscle around in the box, but it was Shola Ameobi who should have been the savior. Back to the net just inside the box with the ball in from Routledge, Shola had his standing leg taken out with no effort even made at the ball. The 2600 faithful erupted in joy, this would be the penalty that would equalize and earn us our point. It was so obviously a penalty, especially at that point in the game. But, to the collective surprise of everyone watching, Atkinson swallowed his whistle and let play go on. And, though the Magpies continued to push for an equalizer, the game ended there, at 2-1.

Take Aways:
1.) On two calls Atkinson changed this game from what should have been a 2-1 Newcastle win to a 2-1 Newcastle loss. It must be hard on a manager to come into an away game outmatched for talent, install a game-plan that will give your team a fighting chance, have that plan executed to perfection by a group of lads that play their hearts out, and be literally robbed by atrociously poor officiating. Not just poor but seemingly one sided. Complaining aside the point is that our manager is worthy of his appointment, and our team is worthy of their promotion. This is not a relegation team, and once they learn how to execute against the also-rans....

2.) Cheik Tiote was utter class yet again. His first activity in the game was making sure someone paid for that tackle on HBA, and he worked magic constantly in the midfield. He showed poise and talent for the entire match on both the offensive and defensive sides, and is our Man of the Match.

3.) Sol Campbell's debut left nothing wanting. He commanded the back four and organized them brilliantly throughout the contest. Whatever he may or may not lack physically, his leadership presence was felt the moment he stepped on the pitch.

4.) Whatever Kevin Keegan and Nicky Butt may have to say, that De Jong tackle was classless at best and diabolical at worst. We are willing to accept anything in between, but will not be assuaged to believing that it was any thing close to a fair played tackle and such is the breaks of professional football. Hoots said, "It was a challenge that did not need to be made," which is the Chris Hughton equivalent of verbal artillery. The motives aside, The Geordies have to wonder what it will mean for the option to buy clause that says if HBA plays 25 games we buy him. Does it put the option to buy in jeopardy at all? We are currently looking for this answer.

Man of the Match: Cheik Tiote