Reasonable Reaction Wednesday: Toon Too Much for the Hammers, by Just a Little

Share All sharing options for: Reasonable Reaction Wednesday: Toon Too Much for the Hammers, by Just a Little

Due to time constraints today, this will be the cliff-notes version of a match review.

I wondered last week which Magpie team might show up in Boleyn, and the answer was, I think, a move in the right direction. The team that lost to Wolves and Blackpool was the team that showed up first, which was admittedly disconcerting. But; after allowing that first goal, the side that beat Everton started struggling for dominance. At the end of the day I think that better side was on the field more often than not. 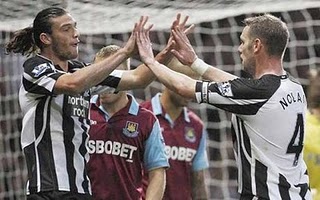 
The tie wasn't all peaches and cream, Danny Simpson seemed to shaking the rust off throughout the game, as he was outpaced a bit on the right side, and Joey Barton had a bit of a shouting match with Andy Carroll. My first disappointment with Tim Krul came this week when he begged for an offside call instead of giving an effort at what looked to be a savable ball. If he does play it, maybe he saves it and maybe he doesn't, let's say 60/40 he saves it by my reckoning, but at least then we don't have to look back and wonder. By and large though the side performed well and controlled the flow of the game. They just need to figure out how to adapt that style on the fly, and adjust to a league that is much better than the Championship.

A quick note on Kevin Nolan. He is, more and more, becoming one of those guys who can get himself into "right place right time" situations, and that kind of guy will pay dividends for the long haul. His goal was in that mold, and on the second goal, he started a run into the open space out to the GK's left and pulled the back that was supposed to be taking care of Andy a few feet in that direction thus leaving Carroll wide-stinking-open. Right place. Right time.

Cheik Tiote played out of his mind yet again. He is so composed on the ball, fearless in the tackle, and his accuracy can be discussed, but that shot has a charge in it. I feel sorry for a defender on the receiving end of a shot of that Howitzer he calls a leg.

Jose Enrique and Jonas Gutierrez continue to be a force on the left. I know both of the goals came from right side crosses, but these two were slicing up the left side for the full 90 minutes. You could blame that goal partly on Jose, who seemed to lost track of his man at the worst possible moment, perhaps he was trying to trap him offside, but....

The play of the game for me was the Joey Barton cross in for Andy Carrol's goal. Joey started that goal with a beautiful through ball within five feet and between the two defenders to spring Ameobi forward and when Shola passed back, Joey took that ball on the roll and crossed it pin point perfect with a beautiful bend on it. Best cross in I've seen from us this season, and it capped off what was an all around great day for Barton who crossed in both goals and exerted some leadership in the, sometimes necessary, form of raising his voice a bit and putting Andy Carroll in his place on the defensive end during a corner.