Good morning, Toon Army. Looks like we may have three suspended players this week. Things are not looking up for the Magpies at this particular point in time. 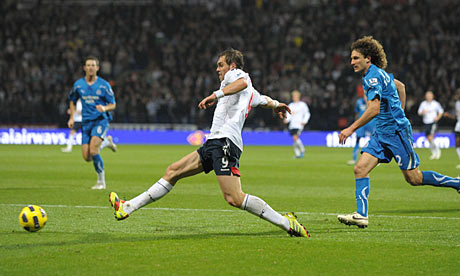 
Mike Williamson has been charged by the FA for violent conduct following a "headbutt" on Johan Elmander on Saturday. (Simon Bird, MirrorFootball) He will reportedly appeal the decision. (Steve Brenner, The Sun) Lost in all of this is the news that Williamson signed a new three year deal yesterday. In fact, that news was so buried that I can't find any stand-alone articles about it. There's a little snippet in the MirrorFootball piece linked above.

Chris Hughton has come out in defense of Fabricio Coloccini, who was sent off on Saturday for an elbow, also against Johan Elmander. (Sky Sports) Coloccini, who will miss three games due to the red card, apologized to his teammates. (Lee Ryder, The Chronicle)

Jonas Gutierrez is ready to move on from Saturday's defeat and face Chelsea. (Paul Fraser, The Northern Echo) Hughton also spoke about the embarassing loss. (Lee Ryder, The Chronicle)

Simon Bird of MirrorFootball became the latest from that publication to preach against the "yobs" who vandalized Darren Bent's car. I agree with what Bird says, but I wish we could have let Brian McNally have the last word.

EPLTalk named Johan Elmander their "Premier League Footballer of the Week." Jamie Jackson of The Guardian also did a feature on Elmander following his performance. A quote from Jackson's article:

Elmander bagged two more here against a woeful Newcastle United side who failed to apply the basics of defending and midfield pressing.