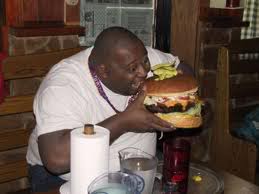 If you Google Image Search "Sol Campbell fat belly," this comes up on page 4. Um, somebody else told me that.


As speculated, Mike Williamson has denied the FA's charge of violent conduct regarding an elbowing incident in Saturday's game, meaning that he will face the appeal board today. Here's hoping he beats the charge. (Paul Fraser, The Northern Echo) Chris Hughton defended his defender, saying the move was merely a body check. (Mark Douglas, The Chronicle)

Luke Edwards of The Journal speculates about the selection of the back four this weekend as well as what course of action Chris Hughton will take in the transfer market this January.

Lee Ryder of The Chronicle notes that Andy Carroll is the current leading goal scorer in the Premiership.