Well, I look silly. I predicted this match would be a race to three goals and both teams would be scoring goals. A 3-2 Newcastle win, I said. Five total goals. If I'm being honest, I actually thought it could go higher than that. So of course it all ended up in a 0-0 tie. Follow us past the jump for the complete review. 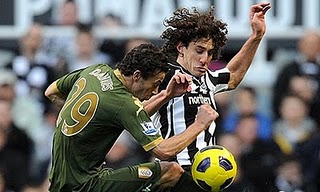 There are good quality, fun to watch, 0-0 ties and then there are the majority of 0-0 ties. Saturday's match fell firmly in the majority for me, and for a team that wears black and white their performance sure smacked of nothing but gray. Both sides were unimpressive, gave only a handful of quality chances at goal, and seemed to trade control of the game back and forth out of frustration. All in all it was mediocre and unsatisfying.

Both sides will say that they did some right things and were unfortunate with hitting a crossbar or a well positioned keeper, but at the end of it all they must admit that they simply weren't able to get it done. Neither had what it takes to win, and we really shouldn't have been surprised that Fullham were able to do what they do best, force a draw.

All boiled down I have to say that, hey, a point is a point, and I'm glad we earned that. But, you have to feel that this game was ripe for three, and we're playing a dangerous game losing these at home and hoping to beat the like of Arsenal on the road.

Peter Lovenkrands: Had a hat trick of chances and to my eyes no fewer than two of them were of the "can't miss" variety. Lover Boy's finishing this year has been suspect and I'm starting to think that if he want to go somewhere else for first team play, then the club shouldn't stand in his way.

Tim Krul: Is the reason this was a draw and not a FFC win. He made all of the routine saves and a few that left me thinking, "How did he get to that?" He's my man of the match.

Andy Carroll: Gave the defense fits and opened plenty of space for Lovenkrands chances. If McLoven had converted any of these then Andy Carroll would be looking like he had a much better match, but alas....

Jose Enrique: Looked his normal self on the left. He worked that part of the defense and created the kind and quantity of chances that you expect from a guy like him. Deft ball handling and a mind for getting himself into space. If his crosses could be a bit more accurate he could be creating some great offense for NUFC.

Cheik Tiote: Had his most average game of the year. I know some other folks will call his blunder a few days ago his worst performance, but the rest of that game was from the Chiek we've come to know. Saturday he was mostly a non-factor. No fault on him really, I think he needs a rest, which is exactly what he'll get since he picked up that fifth yellow.

The Rest of the Squad: had an also ran sort of feeling. The defense was there but allowed some great Fullham chances that were really testing Krul. None of the rest of the squad were horrible, but none of them were really mentionable either. Gray.

Man of the Match: Tim Krul

The new table has us 5 points from relegation, but also 6 points from Champs league so....