Alan Pardew to be Your New Manager, How Bad is This News?

Share All sharing options for: Alan Pardew to be Your New Manager, How Bad is This News?

It's looking pretty firm that Alan Pardew will take over for the exiled Chris Hughton. This entire situation is disgusting from top to bottom. Starting with a BBC report that Pardew was talking to the club as early as ten days ago. As if the Hughton sacking wasn't a big enough travesty against the Toon faithful, Pardew is the candidate that was claiming less that 5% of the vote in most polls. Follow us past the jump and let's try to figure out what this means for what we actually care about. After all, we don't care about Ashley, we don't care about Pardew, we don't care about me, all we care about is NUFC. 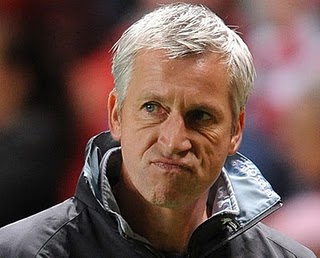 Yes Alan, there is a bad taste in our mouths as well via fourfourtwo.com

Until recently Pardew had taken over for three clubs that were struggling, made them decidedly worse, and was then sacked, but perhaps Newcastle fans can hope that his most recent managerial performance at South Hampton. Last year he lead the club to the Football League Trophy. Then he was sacked. Perhaps when Ashley said he was looking for more experience, he meant experience being sacked.

By the numbers Pardew is hardly an improvement over Hughton:

He also has a section on his wiki page entitled controversy, which is just the kind of personality that Newcastle does not need this season. Comparing these two men, I think what the club will miss the most about Chris will be his calming influence, his levelheadedness. And at the end of this season I think this move will see us closer to relegation that we would have been with Chris. In fact I think it puts us at serious risk for relegation. Let's hope I'm wrong.