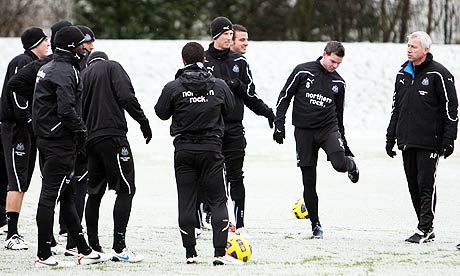 
Alan Pardew has put together a wishlist for the January transfer window, one which includes a winger and a defender. (Mark Douglas, The Journal) Pardew wants to "make sure we resolve" Steven Taylor's contract situation. It's not clear whether that means working out a new contract or shipping him out. (Sky Sports)

It looks like Sol Campbell will not be fit for this Saturday's match. Makes Pardew's decision about what to do with returning defenders Mike Williamson and Fabricio Coloccini just a little bit easier. (Lee Ryder, The Chronicle)

Jonas Gutierrez is excited to play a game in warmer weather...and oh yeah, he wants to win, too. Tim Krul is also looking forward to the match. (Both links from Lee Ryder, The Chronicle)

Alan Pardew speaks about the style of football he wants to implement at Newcastle. An interesting read. (Louise Taylor, The Guardian) Pardew believes that he can make Andy Carroll an even stronger player. (MirrorFootball)