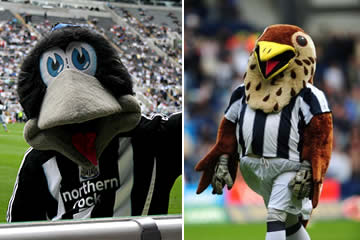 
Usually, I only post match previews on game day, but this deserves a special mention:
Nile Ranger and Mike Williamson both signed contracts Saturday that will keep them Tyneside until 2016. Love it. (Lee Ryder, The Chronicle)

Matthew Campbell, EPLTalk - Weekly referee preview, always worth a look. Predicts lots of cards, a penalty, an ejection, and a 2-2 draw.

Stuart James, The Guardian - Some good match facts to whet your appetite. No prediction but their betting odds favor WBA.

Elliot Ball, Sky Sports - Focuses on the promotion storyline and speculates about selection. Predicts a 2-1 loss.

Martin Lipton, MirrorFootball - Picks against Newcastle yet again, but says it's "tough to call." Let's be honest; it wasn't that tough for you.

Toonsy, nufcblog.org - Notes some milestones and sees Joey Barton coming on for Danny Guthrie rather than Wayne Routledge, as is speculated most other places I've looked.

Ed Harrison, nufcblog.com - Foresees the same formation that Toonsy does and puts the onus on Sol Campbell and Steven Taylor to perform as well as they did last week.