Good morning, Toon Army. Steven Taylor isn't going anywhere for five and half years, which is awesome. I'm a little more worried about today, though. Let's hope he can help contain van der Vaart and Bale. Again, we'll have a combination of previews and news today. 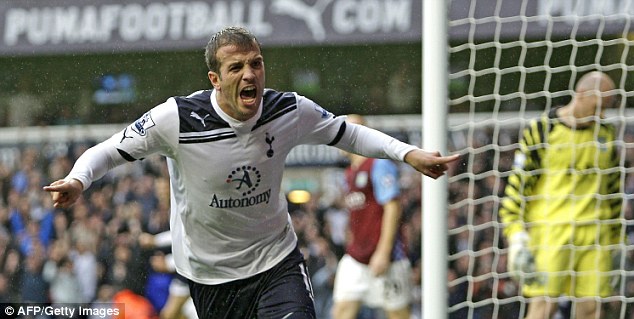 Rafael van der Vaart celebrates one of the two goals that he scored against Aston Villa on Sunday.
Getty Images


News
As mentioned above, Steven Taylor has signed a new contract which will keep him on Tyneside until 2016. (Lee Ryder, The Chronicle) Taylor says that he always wanted to stay and that any hold-up was over business. (Lee Ryder, The Chronicle) Simon Bird of MirrorFootball believes that Taylor could become a legend in Newcastle (and reveals that Taylor will be making about 40,000 pounds a week).

Following Sunday's loss, Manchester City boss Roberto Mancini expressed interest in Andy Carroll, then almost immediately rescinded it. Andy Carroll, meanwhile, had already had a Christmas Day meeting with Alan Pardew where he expressed his desire to stay with the club. (Louise Taylor, The Guardian) I don't expect the Carroll rumors to end until after Deadline Day, but I do expect to continue to ignore them.

Former Newcastle defender Sebastien Bassong, who now plays for Tottenham, understands that Andy Carroll is a threat to score, especially through the air. (Sky Sports) Carroll's availability for the tie was in question, but not anymore. He will play, according to Alan Pardew. (Lee Ryder, The Chronicle)

Ed Harrison of nufcblog.com perhaps takes this tweet a little too seriously and speculates that Hatem ben Arfa will be signing a permanent deal soon. Meanwhile, CaughtOffside (who are notorious for being a little too eager with reporting transfer rumors) reports that Liverpool are interested in the midfielder.

Steve Harper is reportedly fit, but he will not play Tuesday as Alan Pardew continues to stand by young Tim Krul despite gifting Manchester City a goal in the second minute on Sunday. (Scott Wilson, The Northern Echo) Shameless self-referential plug: I disagree with this decision.

Suspension news: In case you forgot, Kevin Nolan is unavailable because he has now collected 5 yellow cards, leading me to believe Nile Ranger may get the start in a 4-4-2. (MirrorFootball) Spurs have decided not to appeal the red card suspension of Jermaine Defoe. Atkinson strikes again! (Martin Lipton, MirrorFootball)