The number one thing that I take away from Saturday's game is that it looks like, at least for now, that the players are still willing to play. Even if they all dedicated the game to Chris Hughton, as Joey Barton did with his MOTM award, this win bodes very well for the reign of Alan Pardew. Let's get right into it after the jump. 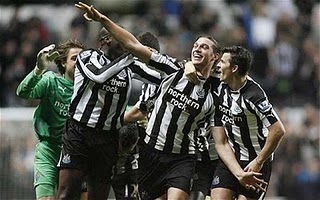 Even Tim Krul had to come forward after that howitzer. via Telegraph.co.uk


The 3-1 score might be misleading as to the competitiveness of this match. Liverpool had one more shot on target than NUFC, and had the Magpies on their heels for a few extended periods of the match. They out-possessed and out shot NUFC, had more corners and less fouls. Their SOGs looked scary a couple of times, especially the one that came off of Enrique, who happened to be in the right place. But, Newcastle won the only stat that matters, and to my eye they did it with poise and passion, even if they didn't overwhelm LFC with skill.

It was very good to have Barton and Nolan back on the field, and seeing the difference in the team when they are both off makes me hope against hope that Ashley and Llambias can make some funds available to Pardew in January. Quick note on that, Pardew was asked about transfer targets and Hatem Ben Arfa during the post match interview and had this to say:

"I've had a brief meeting about potential targets and positions with Graham Carr (Chief Scout). I still need to assess the group here. It would be unfair not to. But the window is an opportunity and you have to keep an eye on it. Hopefully it will be good news."

"I did weigh it up. I am not made of Teflon – I want to be liked and want to be respected, but in the short-term that is not going to happen – I have to earn that right.

"I have managed to do that before and hopefully I can do it again. It is just not true to say the job had been lined up for weeks. In terms of myself I never had contact about this job or any other job.

"It is a weird situation – you hear little rumours, your agent bumps into someone and you hear certain things about so and so and this club. However, that is it – that is all I have had.

"I have heard of two or three clubs in that situation. It is by far and away never fixed up until it is actually done. Travelling up on Wednesday, coming back from Germany I was tired and I was thinking ‘Do I really want to do this?’

"Negotiations had already started by then. All of that process is very, very difficult, but when I arrived at the hotel and weighed up the history of the club – no way could I turn this down.

"I didn’t think the chance had passed, but I have to say arriving here after being sacked from Southampton is probably fortunate for me. By the same token I have always had belief in my ability.

"I went to Southampton to take them into the Premier League – it was not a League One club in my view. I think I had made good strides to do that, everything was in place to get promoted this year so to be taken away from that was a blow.

"I am very pleased to have bounced back with such a brilliant job. I felt unfairly treated there. I thought I was building a very club and team there – the owner had other ideas.

"I like to think I can win things. I won a trophy last year – not the greatest of trophies, admittedly. I have had two promotions too. I almost won the FA Cup too. I think the one thing I do have – which has got me in trouble in the past – is wanting to win things too much. It is about making sure you channel that will to win.

And on Ben Arfa:

"He's in my thinking - strongly. I am going to speak to Derek (Llambias) about that and see if we can resolve it some way."

Kevin Nolan scored the first goal on 14 minutes and made his presence known throughout the the day. His poise and leadership were sorely missed while he was away, and it is a relief that he is back. He did go off in the second half; here's hoping that ankle knock isn't so bad that he misses any more time.

Joey Barton was also sorely missed while he was gone and made short work of reminding us why he was. He's easily the best cross on the team and he generates chances very well from the set pieces. The FA is looking into his "suggestive gesture," I can't see anything coming of this.

Andy Carroll needs to learn a soft first touch. I don't have to convince you all that he's good as of now, but think how good he would be if he could settle down the long pass a little more consistently. Also, that shot. Wow.

I don't know what's up with Sol Campbell, but it would have been a clean sheet if not for his gaff. He's also playing very tired football of the last couple of games. He's been a shadow of the man that helped us win against Arsenal and I for one will be glad to see Colo or Williamson in his place next week.

I also don't know what the heck is up with Jonas Gutierrez, but when he plays like he has in these last two games, it takes Jose Enrique out of the game completely, and if it continues it will be bad bad news for NUFC.

Nile Ranger made a serious bid for first team consideration, as he ran round the LFC defense from his first second on the pitch. I am not one of these Shola Ameobi detractors that wants to see him shipped out as soon as possible, but I'd like to see Pardew let him know that he isn't untouchable by giving Nile a chance on the first team.

Man of the Match: Joey Barton, could it be anyone else?