Top 10 Moments of the First Half

Share All sharing options for: Top 10 Moments of the First Half

Over the last several weeks, the following players have signed 5 and a half year deals: Nile Ranger, Mike Williamson, Steven Taylor, and Andy Carroll. All but Williamson could be called "young" in football terms, and all are solid players that will contribute for years to come.

You know your team has done well when you've caused the London press to wring their hands and wonder how a top team could have possibly lost to a "newly promoted side," and that's exactly what happened when an Andy Carroll header and a perfectly executed game plan vaulted Newcastle into #5 in the table, their high-water mark of the season. 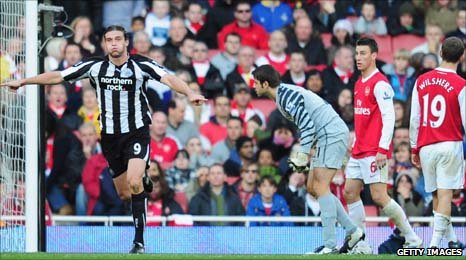 Carroll took one away from Fabianski and Newcastle took three away from The Emirates.
Getty Images

8. The Emergence of Cheik Tiote

Maybe this is cheating, because it's not exactly an event, but Cheik Tiote's wonderful possessive play in the back of the midfield has kept Newcastle afloat during the first half, and I think that deserves some recognition. His story of learning to play growing up in Africa is not totally unique, but it is fascinating and worth reading up on. At the end of this article (Louise Taylor, The Guardian), Tiote says, "Newcastle is perfect for me." Love you too, Cheik.

Coming off of a terrible defeat at the hands of Bolton Wanderers, the Magpies needed something to fall in their favor to have a chance against a slumping Chelsea side, and they got exactly that when Alex was a little too careless in passing the ball back to goalie Petr Cech, and Andy Carroll was happy to capitalize.

In Alan Pardew's debut against Liverpool, the two sides had battled to a 1-1 tie that stood for most of the second half when Joey Barton finally broke through in the 80th minute. As the game progressed into stoppage time, the crowd which had gathered to boo Mike Ashley was enjoying what was a very unexpected three points when Andy Carroll, who had assisted on the first goal and was instrumental in the second, gathered the ball outside the box. The crowd urged him to shoot, the defense backed off, and an instant later a rocket found its way to the back of the net.

Sometimes you just have to appreciate a pretty goal for what it is. Watch this video starting at around 51 seconds for a beauty.

Nobody expected Newcastle to travel to Old Trafford on Opening Day and earn any points, but a 3-0 loss had the doubters out in full force anyway. A 6-0 drubbing of Aston Villa the next week injected some much needed optimism in the fanbase. More importantly, the question "Who will score for Newcastle in the Premiership?" had an answer, and his name was Wor Andy Carroll.

The announcer's commentary on this video clip says it all.

The Magpies were in a bad way heading into stoppage time against Wigan. They'd lost the last two matches as well as their new superstar in the week previous, and they were down 2 goals to 1 against Wigan, with both of the opposition's goals coming from a man who had walked out the door a couple of years ago on bad terms. Then, miracle of miracles, Jonas' cross found an unmarked curly-haired man on the far post to save the match (and according to some, Chris Hughton's job).