Something in the Water: Newcastle's Inexplicable Early Success

Share All sharing options for: Something in the Water: Newcastle's Inexplicable Early Success

September 2011 will not soon be forgotten amongst the Newcastle faithful. The doom and gloom atmosphere that surrounded the club in mid August following a lackluster preseason and the departure of a litany of high profile players seems like an incredibly distant memory. Somehow, Newcastle has made it through nearly a fifth of the season unbeaten, and is sitting pretty in fourth place, with murmurs of European competition becoming less absurd on an exponential basis.

Chances are you're on this site for one of two reasons:
A). You love Newcastle as well, and want to bask in the glory of us waxing poetic on the majesty of the Toon.
B.) You're a fan of one of the teams we've played this year, and you're still trying to figure out what the hell happened.

Look, I love NUFC to death, but our early successes this year have been, to put it lightly, really surprising. If you had told me at the beginning of the year that we would somehow be unbeaten and sitting in a Champions League spot at any point in the season I would have giggled nervously and looked into having you committed. But rather than take the Magpies' early glory as a sign of the impending apocalypse, let us allow instead for rational heads to prevail. Following the jump, some totally scientific theories as to how Newcastle has become so dang good.

Totally Scientific Theory #1: Good Riddance to Those Guys
Carroll, Barton, Enrique, Nolan... all names that hold a lot a lot of meaning in the Newcastle realm. The departure of each one of these guys was like a punch in the gut. To put it bluntly, getting rid of players that good should almost never make a team better. And yet, when we look at the simple before and after, it appears that is exactly what the case is in Tyneside. How on Earth could that have happened, especially when we replace Jose Enrique with a schizophrenic Ryan Taylor who likes periodically launching shots from midfield and turning his back on attackers? It doesn't make sense, and yet, in a way, it kind of does...

Consider, Enrique's departure hurt, no doubt, but as the months went on his vocalization of Newcastle not "meeting his aspirations" became increasingly louder. His tweeting became more vitriolic, and it was rapidly degrading to the point where Enrique's presence hurt far more than it helped. The same can obviously be said, and has, for Barton. Carroll, while much more positive overall, did have a nasty habit of breaking laws and jaws, and he always seemed to have one foot out the door.

Nolan is the tricky one of the bunch. By all accounts, Nolan was an awesome guy, a good leader, and pretty cracker on the pitch, too. Still, his speed was always a bit of an issue, and his handling of the Barton/Enrique situation was non existent. While you don't necessarily want your captain to be overbearing, Nolan seemed to let a lot of simple locker room fixes slide. Nolan's departure still stung, but quite frankly, it allowed the much more talented Ben Arfa a chance to play, and in the long run it probably got Cabaye on the field more consistently as well. It also created the opportunity for a certain curly haired defender to become the new skipper, which brings me to...

Totally Scientific Theory #2: Coloccini Runs the Locker Room with an Iron Fist
It's very easy to both understate and overstate the importance of a captain on a sports team. When given to someone who isn't a particular strong leader, the role is simply wasted, but it doesn't, by necessity, hurt the team overall. When utilized effectively, however, giving the right player the captaincy can give authority to a natural leader, one who can galvanize the team in a way no manager is capable of doing. Coloccini has played phenomenally well these first few weeks, and because of his role, that play is put on a pedestal for the team to feed off of.

Another thing of note is that since August, all reports out of Tyneside have been comparatively sunshine and rainbows. It seems that by removing the sullen attitudes of Enrique and Barton, the locker room went from a hellish place of woe to a wonderful Candyland filled with love and lollipops and unicorn smiles. Take a look as these exclusive before and after photos: 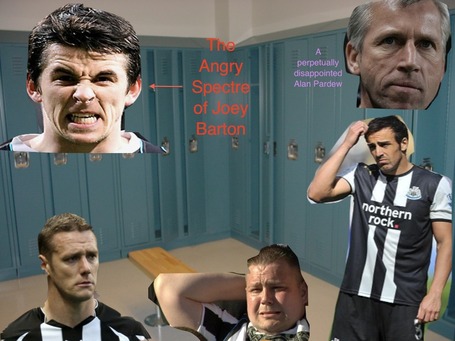 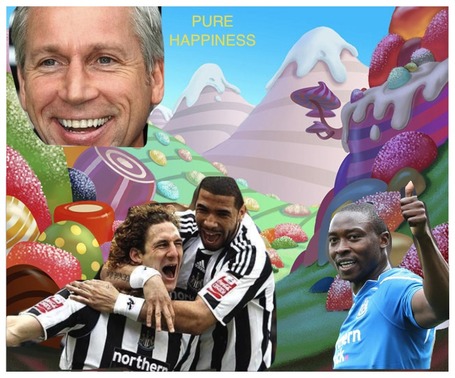 OK, full disclosure... I totally photoshopped those, but I still think they're pretty legit. In all seriousness though, I think that Coloccini does have the locker room pretty under control. Winning certainly helps, but it's kind of a cool cycle like that. The happiness helps us win more games, and winning more games keeps up happy!

Totally Scientific Theory #3: Leon Best Really is Mint
And, for the record, the dude totally looks like Drake. However, the combinations of Lovenkrands, Best, Ameobi, and Ba somehow seem to have valmorphinized into something that vaguely looks like a semi decent striker. Granted, nine goals in seven games isn't exactly something to write home about, but it is something, and at the beginning of the year I think there was some mild concern that Newcastle might go through the season without any results better than 0-0 draws. It's not Andy Carroll, and it's not Gervinho, but you know what, it's kinda working. Newcastle is going goals when they need to, and Demba Ba has suddenly remembered his has a pulse (or perhaps realized that Blackburn doesn't), which is good news going forward.

The flip side of the offensive side of the ball is the undeniable fact that Newcastle has been playing lights out defensively. Though Simpson and Raylor are prone to minor gaffes now and again, Colo and Saylor are an unbreakable brick wall, and Krul has been absolutely brilliant by and large. It's also worth noting that Tiote and Cabaye have been playing out of their minds in the middle, and while generating offense might not be their forte, their ability to possess and win balls in the midfield has made Newcastle a defensive revelation. While this theory kind of boils down to: "Well... the guys are playing really well... duh," I think the bigger thing to note is that while at the beginning of the season Newcastle didn't really have a single player of note in the scope of the Premier League, our ragtag band of fighters has done very well for themselves. It's a bit like The Replacements... only not really at all.

Totally Scientific Theory #4: Alan Pardew is a ^%$@ing Genius
I'll be the first one to admit that I armchair quarterback the hell out of NUFC. I have advocated like, a billion times, for Pardew to get Simpson off the field and move to a three man backfield. I've never understood why our center mids play so far back. I don't like it when Raylor shoots from touchline. And yet, for some inexplicable reason, our good man Alan hasn't listened to my pleas and has instead implemented his own game plans (the audacity!)

We run a basic 4-4-2. We play absurdly defensive. Pardew went for the bargain bin with Obertan, Cabaye, and Marveaux, Santon, and Ba and didn't splash any cash for a new strong new striker. We're boring, we play mildly dirty, and our offensive production hinges on the defensive ineptitude of our opponents. And we're winning! Or, at the very least, we're not losing. The man has some kind of magic touch so far this season. I like to imagine him giving his pre-game speech in some odd trilingual amalgamation of French, Spanish, and English, and then flashing one of those all star smiles before returning to the dressing area to apply more product to his perfect hair. He is our leader, he is our Silver Fox, and right now, he is undefeated. Long live Pards!

Here's the thing. I don't think we're actually as good as fourth in the table, and it pains me to say it. Thus far, our opponents have a combined goal differential of negative 19! Only Aston Villa is in the top half of the table. We have yet to play either team of Manchester, Everton, Tottenham, or Chelsea. It's hard to gauge how good we really are when we have yet to play a strong opponent. This week's game, at home against Tottenham, is going to show us plain as daylight if we are worthy of our spot on the table. Does this mean Newcastle can't compete for Europe? Does it mean we should buckle in for another relegation battle? Well, not quite, but I don't think we should get ahead of ourselves either. Two teams currently underneath us, Liverpool and Tottenham, are much better than their positions show. It's not unreasonable to realistically think that we may finish in a Europa spot, but to have our motley crew seriously vying for the title may still be a few seasons off. At the same time, I think it's getting pretty safe to say we're not going to end up caught in the murk and mire of the bottom three either.

One of my favorite sports writers, Bill Simmons, talks often about a "Good Bad Team." A team like this is one that beats up on all the other bad teams, but loses pretty consistently to the rest of the league. In short, it's a team that knows it's place, and doesn't surprise anybody. While I think Newcastle's early success has surprised a lot of people, but when you really break down the events, and the competition, of the last few weeks, it becomes apparent that Newcastle performed exactly as they should have. Now, if we start beating the Manchesters and Chelseas of the world, then the rhetoric will understandably change, but for right now I think it's important to take our standing with a grain of salt.

And, in the meantime... CHAMPIONS LEAGUE BABY!