Newcastle United head to the Britannia Stadium on the heels of their first competitive loss since May 1 hoping to preserve their undefeated start in the league. Stoke City have carved themselves out a specific niche within the league and have parlayed a 13th place finish and qualification for the Europa League into a successful European adventure and a solid 11th place league position. Both teams seem to have progressed from their 2010-2011 counterparts-- but will Newcastle and coach Alan Pardew have learned their lessons from Stoke's 4-0 victory in the corresponding fixture from last year?

Following a spectacular Chelsea defeat on Saturday, Newcastle United have the possibility to jump into third position with either a draw or a victory- it is still only 10 games in, however every point to the good will be just that bit more helpful as Newcastle head into a gauntlet of fixtures against Everton, Manchester City, Manchester United and Chelsea in their next four matches. After the jump-- points, predictions and pretty pictures!

"They have a stadium that makes a lot of noise and they have a pitch that suits them because it's a small pitch."

With our desire to play a flowing, pass-oriented style, this will pose a challenge to our ability to impose our will on the match.

3. Stoke City have scored 71% of their goals this season from set pieces. Needless to say, if Captain Colo and Steven Taylor can keep on track of Peter Crouch and Kenwyne Jones, it will bode well for our chances of at least taking a point from this match.

4. In the 4-0 defeat last season, Stoke managed to block 8 of the 15 shots that Newcastle United attempted. 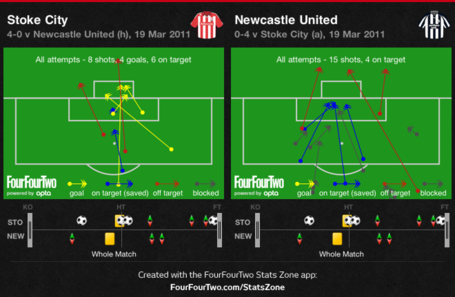 We will need to move the ball effectively to unlock their defense and gain some clean air to shoot through if we are to take anything away from the Britannia. Oh, and as you can see from the graphic above (via the FourFourTwo iPhone app, powered by Opta)-- we may just want to mind the six-yard box this time.

5a. Newcastle were dominated in the air in the last meeting between the two clubs and also managed just 13 successful defensive clearances in 31 attempts. Better results on both of these fronts will be essential for any positive outcome to be realistic.

Stoke City are very very difficult to defeat at home. In fact, they are 8-4-1 in their last 13 home matches, have only conceded 5 times in the last 10, and have not allowed more than 1 goal in a match in those 10. The popular thought out there amongst Newcastle fans is that a draw is the most likely result to hope for- and it may very well be. I think that this year's squad have shown an increased ability to grind through and manage a result, and I think that is what gives me hope heading in to this match. Again it is largely going to come down to our central midfield's ability to exert their influence on the match. If Demba Ba ends up spending as much time around the midfield stripe trying to pick up balls as he did against Wigan, it could end up being a pretty long night for the lads.

Prediction Guaranteed to Be Wrong: