Share All sharing options for: Newcastle United v. Manchester City: This is THUNDERDOME™

As clubs start their preseason tours in July, all the pundits get around a very large table and divvy out the ideas and prognostications for the year. At least this is how it happens in my head. I am fairly certain that this process occurs by random draw from a Crown Royal bag, but whatever. That's not the point. After all of the different permutations of the Sky6 domination scenarios are given out, and the Reasonable Interloper scenarios are given out... after all of those are gone, THEN Joe Schmoe from the crappiest beat gets assigned the unreasonable preview prognostication. Or at least if this is how it had happened, Joe would be a genius just now. There are precisely 0 people in the world that would have predicted that a matchday 12 fixture between Newcastle United and Manchester City would involve the last two undefeated teams in the Barclay's Premier League.

As johnjahafanclub pointed out so adroitly in the Wednesday links:

when was the last time the Newcastle-Citeh match was bigger than the Liverpool-Chelsea match?

It is so true, and it is making the talking heads vomit in their mouths a little bit, I think. And I love it. Jump to the points!

1. Score a first half goal. City have conceded exactly two first-half goals through the first 11 games, trailing only once this season for 15 minutes during their last match (QPR). Although the effect of a first-half goal has been debated, there is something to the "punch a bully in the nose" defense. And, it would give a bit of a buffer and be good prep for the second half, in which City have conceded 80% of their goals against. Interestingly, as shown by this nice stat piece on our sister site Bitter and Blue, Manchester City score the vast majority of their goals after halftime. I went looking through the FourFourTwo app, expecting to see some expression of this trend in the underlying stats. I first checked the passing stats, and was very surprised to find that they actually pass less in the second half, suggesting that they like to get you chasing around in the first half to be tired in the second... and then they pounce. 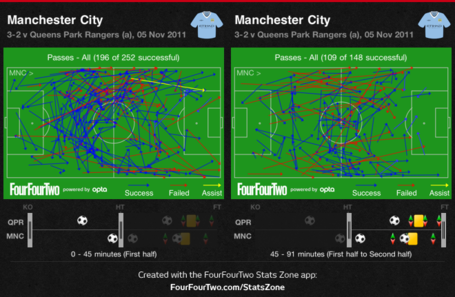 2. Prepare for Milner Silva. Much the same way as Newcastle have used Jonas Raylor to very good effect in the last several weeks, Manchester City will frequently end up with James Mliner and David Silva stacked on the same side to provide extra pressure on the defense. This usually occurs on the left hand side of the Citizen offense. . . Danny Simpson are you listening?

3. Whomever ends up patrolling the central mid has to break up the passing lanes and not let City knock the ball around at the midfield stripe. Many of their goals this year have come after bouncing the ball around midfield a little before it springs out to one wing or the other. Whether it's Cheik, Danny, Yohan, Dan or Mehdi, it will be essential to not allow this build-up phase to happen smoothly.

4. Watch the runners. When City do score their run of play goals, there are common themes. The build up through the center of the park is one, and the other is that nearly every time, one of their strikers (Edin Dzeko or Mario Ballotelli usually) or James Milner end up withdrawn into their own end, gets involved in the early part of the move with a couple of passes then heads toward goal. . . ending up involved as provider or finisher at the end of the move. Newcastle will need to have the discipline to follow the off-ball movement in order to dry up the supply of assists.

5.Determine early what is going to trouble the City back line. Two squads have scored 2 goals in a Premier League match against the Citizens this year. Interestingly, in each game, both goals were scored through the same general idea- but the idea was different in each game. To help explain, Pictures! Fulham goals v. Manchester City (2-2)

By contrast, Bolton scored twice in their attempt to defy City's greatness- one from a crossed ball and one from a free kick from about 35 yards out or so that was delivered into the box aerially. I know it's a little vague, but when something works against City, it works. It's just a matter of A) finding the One Thing and B) executing.

City loves to shoot the ball. Oh, how they love to shoot the ball. Only once have they shot fewer than 18 times in a match this season in the Premier League (14 v. Aston Villa. And they still scored 4 times). All total, Manchester City have shot the ball 225 times through 11 matches (20.454 per match). Predictably, they have scored a lot. Or have they? They have scored 39 goals in the 11 matches (3.545 per match), but only score on 17% of their shots total. . . which is about what you would expect. By contrast, Newcastle score on approximately 12% of their total shots, which is a little low, actually.

Newcastle United give up a fair amount of shots, having allowed 156 through the 11 matches thus far (14.2 per game), but here's the thing. Messrs. Simpson, Saylor, Coloccini, Raylor and Krul have conceded 8 goals through 11 matches. If you do the math, Newcastle are conceding 1 goal in every 20 shots or 5% of the time. If the numbers hold, Manchester have about a goal in them... in a vacuum.

A league-high 50% of the goals Newcastle have conceded have been from set pieces. We're only talking about 4 goals, of course, but it is a little troublesome as Manchester City are quite adept at scoring from set-pieces. If the back line perform with the same type of focus that they did v. Stoke, it would certainly help.

Whichever of these two men is able to exert their will on the match more will likely have the deciding sway on the match. If Toure can do what he's done and create through moving the ball effectively through the middle of the park, Manchester City will likely come out to the good. If Tiote can prevent this and encourage Newcastle to build up possession patiently, you have got to think that Newcastle are in with a shout to at least walk out with a point.

My WAG at lineups!

Now is the time on 5 Points where we dance. Or, actually, where I wildly guess which reports that I've read have what amount of truth. I've read that Ameobi will be healthy, or he's still out long-term. Tiote is in or out. Obertan is in or out. I'll operate from the assumption that long-term absences will remain long-term absences and players such as Tiote and Cabaye who have or would have played for their national teams over the break will be available.

As I worked through that projected starting XI for Newcastle, it makes a great deal of sense to start Gosling on the right wing his defensive ability could be a tremendous asset and help to Danny Simpson if he were used in a right-sided Jonas role. I'm certain that it won't work out that way, but it makes sense.

I saw this match described at one point as The Irresistible City v. The Immovable Toon somewhere, and it really does basically come down to that. Can we maintain our tremendous defensive form? If so, we stand a good chance for at least a point. If their offensive play is too much... it could be a long day. I think the truth is in the middle. I'd love to see us taking something out of the Etihad, but it just seems a bridge too far. I don't see the doom vision of a Manchester United-style collapse, either. I think it's a close, well-played match in which we will acquit ourselves very well (and get no respect afterwards in a series of "WE TOLD YOU SO" stories.)