Share All sharing options for: Quick Reaction: Anatomy Of Perspective

After 39 years of waiting, it will be at least one more before Newcastle United have a chance to break their duck at Old Trafford, but the mood is still one of celebration amongst the Toon Army with the lads stealing away with a sensational point today. Predictably, Sir Alex Ferguson has had plenty to say about today's match, and we'll be dealing with that a little bit later, but I would like to latch on a bit to one particular quote (likely the least incendiary thing that SAF said in his presser, I would imagine).

After the jump, let's take a very quick look (with pictures!) at what the numbers say. It's a little surprising.

If we were "slaughtered", it should surely show up easily in very basic numbers, correct? A very rough view shows that Manchester United held 59.9% of the possession, but this number is very much skewed by the sustained possession that they held following Jonas' dismissal at 78' (16 minutes at nearly 100% possession can't help but skew the number). If we peel back even one level with regard to this stat, what do we find? Manchester United, while holding the 60/40 edge in possession held a territory advantage of 51.1% to 48.9% Again, it can be assumed that this number was skewed significantly in the final 16 minutes, so to term what happened on the Old Trafford pitch as a slaughter would be inaccurate at best.

Undeniably, the tide shifted quite a bit after Jonas was dismissed- but it didn't translate appreciably in the passing stats: 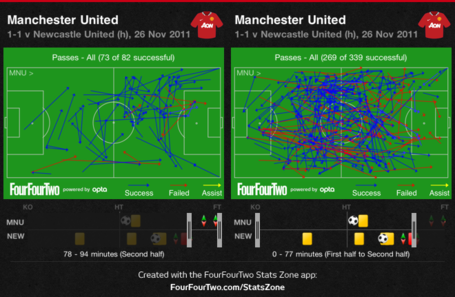 As a matter of fact, the red card only expresses itself in the shot chart. 13 of the 28 attempts on goal from Manchester United came following the card. Ultimately, the shots were always going to come down in favor of the Devils... but we did what we do-- We defended like our hair was on fire, threw our bodies around like crazy and did what was necessary to take a point. 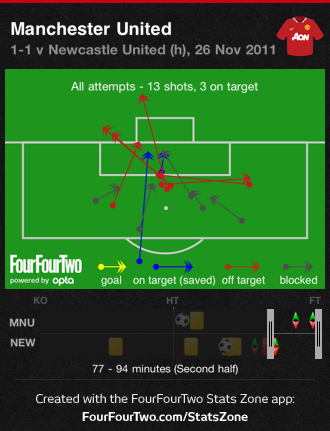 We'll dive into some more of Sir Alex's comments separately and have a more reasonable reaction forthcoming as well... but slaughtered? Frankly, both teams were a bit unlucky to not take 3 points (let's not forget the De Gea save from the absolute corker from Captain Colo). Celebrate away, friends- one more stop on the #StretchOfDoom, and we're probably a point ahead of where we would have hoped to be! Howay the lads!