Tim Krul's Distribution: Are We Ultimately Playing With Fire?

Share All sharing options for: Tim Krul's Distribution: Are We Ultimately Playing With Fire?

On the heels of a banner week for keeper-induced turnovers leading to goals, Zonal Marking did a great piece on building attacks from the back v. the goalkeeper bombing away with his distribution.  It was particularly interesting to me because I had just recently been pondering Tim Krul's distribution habits and results.  I know that this is not the first time that this topic has come up here, but the ZM piece really gave me impetus to dive in a little.  Take the jump, and we'll investigate Tim's distribution, what it means for how the defense has performed and what it may mean going forward!

...what’s better in the long-term – to concede possession in a dangerous position less than once a game, or concede possession on the halfway line 25 times a game and invite 25 separate attacks from the opposition? Doing the former will invite more criticism, doing the latter will probably concede more goals.

Before we consider what ramifications this question has on Newcastle United, let us look at a couple of Tim's latest performances relative to his distribution:

First up, Saturday's match versus Manchester United, in which Tim completed 18% percent of his attempted passes: 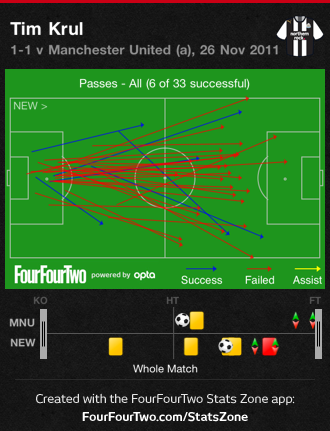 Similarly, and arguably with more telling results, here is his passing chart from the Manchester City match: 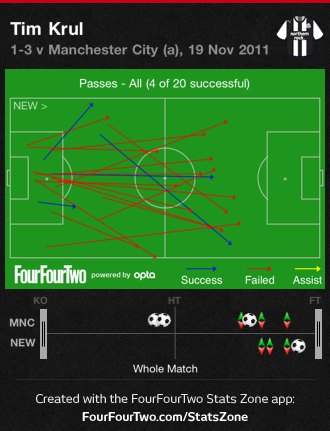 Over the past two matches, Tim Krul has completed only 10 of 53 passes for a 19% clip.  In terms of the premise of the Zonal Marking piece, this has subjected Newcastle's defense to 43 additional attacks over the past two games.   Especially with regard to the Manchester City match in which we struggled for any traction whatsoever against their possession game, it is no stretch at all to see that we may have benefitted from a slower build-up from the back.

I decided to look back and find a more successful day passing for Tim, and I found one in the Blackburn Rovers match.  Recalling this match, it was probably one of our more dominant performances, at least so far as the comfort of the play.  I remember feeling that it never really felt that Blackburn had much in them that day.  Tim's passing: 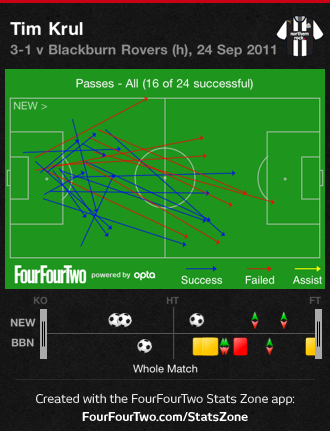 Notably, along with a much higher percentage of completed passes, many more of these passes from Tim were shorter.  On the back of this, look at the short-pass results for Newcastle from the same match: 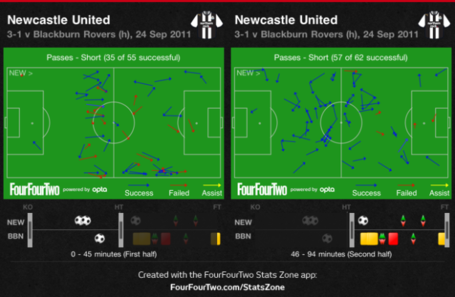 Granted, it could be an extreme coincidence that these match up and line up with probably our most comfortable performance of the season, but it is certainly food for thought.

The question that begs to be asked at this point, then, is:  how are these results influencing the defensive numbers for Newcastle so far?  Is the defense actually better than the numbers would indicate based on the number of extra attacks it is absorbing on turned over clearances?  If they are overachieving and cheating the numbers based on these extra possessions for the opposition, will they eventually regress to the mean eventually?  What do you think?