When considering the #StretchOfDoom before the season, I think that most of us would have earmarked this match as the one of the three to go and get. Perhaps mostly just for the fact that it's a home match, but still. In the meantime, the season has happened and Newcastle are not propping up the table while Chelsea are back on Sack Watch as they have underachieved by only being 5th in the Premier League, crashing out of the Carling Cup to Liverpool Tuesday, and being in danger of not progressing in the Champions League. On a very micro level, this match really could not have fallen at a better time for Newcastle. Andre Villas-Boas went with a relatively young squad for the match v. Liverpool leaving him with some interesting decisions regarding his squad for Newcastle (Saturday) and Valencia (Tuesday). Following the jump pictures, points, predictions!

I went looking for the width that I have seen described in breakdowns of Chelsea's tactics, and I wasn't finding very much from the players that I was expecting. Ivanovic and Cole combined for only 4 crosses in the match versus Wolves last weekend. It wasn't through the midfield of Romeu, Ramires and Meireles, either. Where then?

Which in the Wolves match translated into: 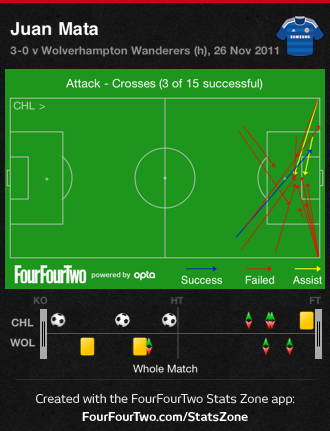 The ever-vascillating idea (and presumably mutually exclusive ideas) of "managerial job security" and "Chelsea" make this a difficult one to predict. Having lost out in the Carling Cup, there is doubtless to be pressure to win. The question is, which competition will Andre Villas-Boas put the stronger side out for... the Premier League or Champions League? Complicating the issue a little bit is the fact that a 0-0 draw puts Chelsea through in the CL... so although I would presume the eggs go in that basket, he could easily decide to play for the 0-0 at home v. Valencia Tuesday. As it is, I am assuming a return to the lineup and tactic from the 3-0 win over Wolves. Instant gratification, baby!

Fearless Prediction Guaranteed To Be Wrong!

Newcastle look like they will be close to a full-strength squad on Saturday, and I am going to keep assuming Tiote to be returning because, well, eventually he's going to. Right? RIGHT?!? On the heels of the encouraging showing versus Manchester United, the fact that the match is at St. James' Park-- an emotionally charged St. James' Park at that, and a sell-out crowd added in with a favorable matchup regarding what we have done successfully recently v. where they have struggled recently... I think that I am prepared to predict:

Newcastle keep their first clean sheet in 5 matches while Hatem Ben Arfa has an insane moment of genius to bring 3 points back and a 4-point beyond your wildest dreams haul from the #StretchOfDoom. Now then, the lads just have to go out there and get it done. Regardless what does happen, I do know that Alan Pardew will be looking fine.