Norwich 4 - 2 Newcastle: Reasonable Reaction - Statistically Speaking, It Was Different Than You Think

Share All sharing options for: Norwich 4 - 2 Newcastle: Reasonable Reaction - Statistically Speaking, It Was Different Than You Think

Alreet. So the Norwich match happened and we know that Norwich are who we thought they were, and frankly we were who we thought we were, right? Perhaps. I took a moment and got over myself to look at the stats to see if we really saw what i remember seeing. Typically (at least for me) the numbers tell a story, but it's a slightly different narrative than what I anticipated, although it still suggests that we got what we deserved. I'll try not to clog the after-jump with too many of the four-four-two pics, but there is one that is EXTREMELY surprising. So let's jump and see what we can see.

In the preview, I pointed out that Norwich had only out-possessed 4 of their opponents in their most recent top division life. We managed to allow them a 53/47 edge in possession, but more importantly, that translated itself to a 55/45 territorial advantage. Even more interesting, Newcastle intercepted 22 Norwich passes, and still managed to give up these numbers. For whatever reason, we seem to be content to allow our opponents to have as much or as little of the ball as they would like, which is strange to me. When we have had the ball, we have shown the ability to move it around usefully (by and large... If Gaby plays one more awful move-killing ball to nowhere, I may just lose faith in him...), but this is a disconnect in my own head, not necessarily something that really is weird, so I move on.

Predictably, Norwich bombed in 29 crosses during the match. This is the beginning of where it gets weird. Out of the 29 crosses, only 7 were successful. Either these crosses are low-quality/high-reward type propositions, or maybe we were not as ill-prepared as I may have thought. In fact, we had a greater than 50% success rate in headed clearances (14/26) which is better than in most of our matches in which we have been tested in this manner (Everton and Stoke, for instance, while ManU and Chelsea did not enter double-digit cross attempts against us.) All of this buildup leads me to the one picture that I will include in this little piece. 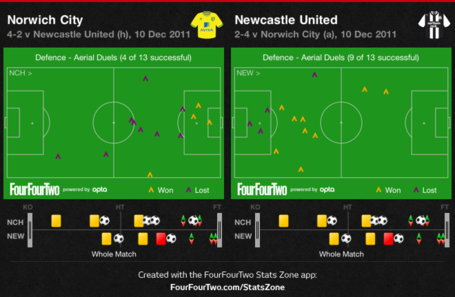 What this picture shows was the most surprising thing that I found in the stats. Norwich only won 4 out of 13 aerial duels. 4. And they scored three of them. Granted, those three were gross breakdowns of defensive structure, but ultimately, they were not any better than we were in the air. Could it ultimately be as easy as blaming this loss on the loss of our starting center backs? Playing a makeshift and unfamiliar back line? It very well could be. Being out-possessed is not something new to our heroes, so that alone is likely not an answer to "what happened?" We were successful in 27 of 49 clearances in general, which is right in line with our season average, save for the pure number of clearances needed. With the sheer number of crosses being bombed in, however, it's really not surprising that the total clearance opportunities are going to be much higher. Ultimately, it really does look like it was down to the easy explanation this time... no matter how frustrating it might have been.