Newcastle United take the pitch at St. James' Park on Saturday with the hope of stemming a run of poor results over their last four matches. The doomsayers will point this fact out - that NUFC have taken but 1 point of the last 12 on offer. That may be true, but it does look as if Captain Colo will return to the center of defense at the very least, with an outside chance that Mike Williamson will make his return to the starting Xi. The media are of course teasing that Cheik Tiote might make his return to the lineup as well, but I'm willing to wager that this does not occur, particularly if the inevitable bid prices for the Ivorian are closer to the rumored £25m than the £16-20m range. I'm growing more and more pessimistic that we'll ever see Tiote in a Newcastle strip ever again, and that makes me very distressed. Anyway, the match will go on regardless, and here are some items of interest regarding the match:

On the surface, the trends and figures suggest a much more favorable outcome than the way it all looked to line out with regard to the Norwich match last weekend. Interesting factoiids regarding Swansea this season:

1) They have only earned two points away from home this season, which is good for dead last in the Premier League with regard to away form.

2) They have lost on each of their last three visits to Newcastle and did not score in each of those matches.

3) They’ve conceded 18 in their seven away games scoring only six times on their travels.

4) They have failed to score in seven matches, more than any other team in the Premier League this season.

5) Swansea haven’t won at St James’ Park since a 2-1 victory back in October 1980 when both sides were battling it out in the Old Division Two.

In the last meeting between the two clubs (in the Championship), Newcastle United emerged victorious by a score of 3-0, with Marlon Harewood bagging a brace and Peter Lovenkrands adding the third. Overall, it would be the considered opinion of most that Demba Ba's recent form surpasses anything every accomplished by Mr. Harewood with Newcastle, so that's got to be encouraging. Thing is, they didn't have this guy back then:

Michel Vorm - who not only is keeping Tim Krul further from the #1 for the Dutch national team, but has kept more clean sheets than any other Premier League goalkeeper (7) this season. Again, however, Demba Ba's 11 goals in 14 matches is greater in proportion than Vorm's 7 shutouts in 14. So there's that.

Of particular concern, especially if for some reason the health-rug gets yanked out from under the Toon again this weekend as pertains to Captain Colo, a Premier League worst 58% of the goals Newcastle have conceded have come from set pieces. Possible strategies: DO NOT CONCEDE SET PIECES. Or, be more fundamentally sound on said set pieces. Also, replacing Demba Ba with someone who doesn't get beat to headers in defense might be a viable strategy.

Upon checking out some stats and pictures and whatnot, I did find something disturbing: 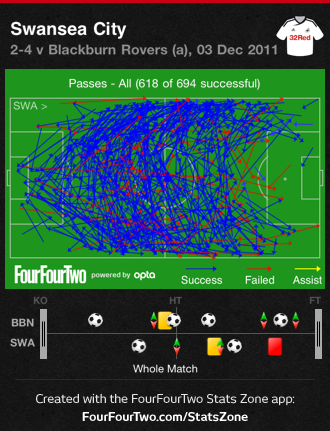 That's right-- Swansea pass a LOT, which is not too troubling one way or the other... but what is mildly disconcerting is that their passing chart is almost identical to what we found looking at Norwich last week. We are going to have to hybrid the best of our defensive displays from the season to ensure success this weekend-- we will need to close down the ball like we did v. Stoke or Manchester United, and we will have to maintain our defensive shape as we did in, well, most of our early-season matches.


I am scared to even try another prediction, because it didn't work out so great for me the last time... so you get no prediction. If you want to leave your own below, feel free to do so!