Just 8 days ago, following the Manchester United match (and prompted by a piece on Zonal Marking), I paused to wonder if Tim Krul's distribution was causing undue pressure on the Newcastle back line. It would seem that someone was listening. Or at least, I would sure like to think that someone was. During the match with Chelsea, it was quite obvious that there had been a significant shift in the distribution philosophy of Newcastle United. After the jump, we'll investigate more in-depth. Whether this change was an attempted tactical response trying to capitalize on something AP found in his video study or it signifies a complete shift of distribution trends remains to be seen, but the change was noticable and striking.

Prior to this match, much of Krul's distribution was from the floor or through punts, and more often than not his pass success rate was below 50%... sometimes lower than 20% even, giving extra possessions to the opposition. Presumably not all of these turned into scoring chances for the opposition, but it seems fairly certain that at least some of them would have done. 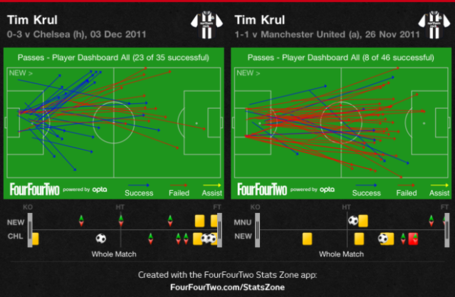 The blue arrows above indicate succesful passes, the red unsuccessful. 38 of 46 passes (note: this number includes every distribution, throws, punts, kicks from the floor) in the ManU match went to Red Devils. Contrast that with the image on the left from the Chelsea match. Sum total, 23 of 35 of passes (again, this includes throws, punts, kicks) found Magpies. If you were to look back at every match, at 65% success this is one of Tim's best performances in this regard. I would like to break it down just a little bit further, though... see the next image: 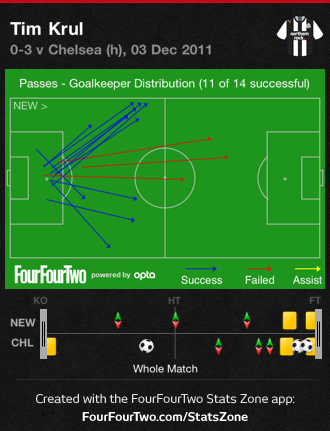 This image shows a much rosier picture of Tim's distribution, and is the reason behind this revisiting of the piece from 8 days ago. What this image doesn't show is that every single one of the completed distributions here was a throw. In this match, we saw a complete departure from Tim's previous distribution tendencies. Instead of relying on the punt to move the ball far downfield (kind of a hit-and-hope type thing, really) when Tim collected a ball you would see him take off full-speed toward the 18-yard line and distribute by throwing. While the grouping would indicate that we were trying to distribute to one player in particular (presumably by positioning Peter Lovenkrands), this is not the case, although clearly we were keying in on the Chelsea right. (for reference sake: Ryan Taylor received 3 of these distributions, Steven Taylor 1, Yohan Cabaye 1, Danny Guthrie 2, Peter Lovenkrands 3, and Sammy Ameobi 1) Perhaps the idea was to try to catch Ivanovic coming forward and get behind that way, there is no real way to tell, but what is clear is that at least for this match, we intended to control from the back more than we previously had and work up the left wing. Particularly in light of having lost both of our centre-halfs in the Chelsea match, I am hoping that this represents a wholesale change in philosophy regarding GK distribution. With Jonas' return on the left and hopefully Good Gaby on the right, it sure makes a lot of sens to keep the pressure off of James Perch and whomever draws the short straw and fills in at the other centre-half position. In a vacuum with our First XI all on the pitch, the upside of this strategy has tremendous potential to reap reward-- getting it out to the wings accurately and letting them move the ball up the pitch with Cabaye and Tiote providing options... it's enough to get a guy giddy about how it could translate favorably. At the very least however, we can wonder two things:

1) Was this a one-off where we were trying to catch Chelsea out? (hopefully not a one off, hopefully yes a strategic move)