A month ago, this was supposed to be the happy emergence from the #StretchOfDoom in which we either continued momentum gained from a stellar run through City, ManU and Chelsea or righted the ship from a less stellar stretch of results. The latter, at least points wise, is what ended up being the case, but the joy factor is blunted by the loss of Steven Taylor, Fabricio Coloccini and Danny Guthrie to injury in the Chelsea match. Thus, it is a under-strength squad that limps into Carrow Road on Saturday when Newcastle United visit Norwich City for the first time since 2005. Following the jump, a little bit of "Getting to know Norwich City".

I am not always tremendous at recognizing patterns... but when I began looking at the stats for Norwich City, something jumped straight out at me. Follows a set of pictures in which you may see what I saw: 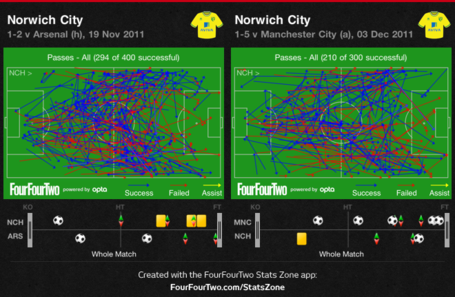 These are Norwich's passes from their last two PL matches. Especially the Arsenal match, the fact jumped out at me that they almost never pass into the box. Many times, I think that I'm seeing something that really isn't there. So I went back further: 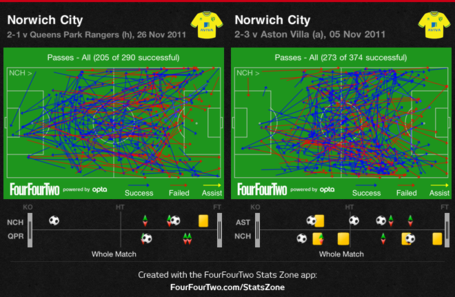 Once again, the penalty areas are curiously devoid of passes. Norwich clearly prefer to attack down the left or right side in roughly equal measure, but significantly more than down the center. It will come as no surprise that this tidbit is true, then - Norwich have scored 7 headed goals thus far, tied for most in the Premier League with Chelsea. Now the question: What does this mean for a Newcastle side missing both of their center backs... a side that has conceded headed goals after being forced to remove one of their center backs as recently as well, last weekend.

Though Norwich are not afraid to change formations mid-match, it is rarely accompanied by a shift away from this left-right based philosophy. More often than not they play in a 4-4-2, but have also used a 4-1-4-1, 4-1-2-1-1, 4-2-3-1 and several other formations, all mostly variants of a 4-4-2 slightly modified by player placement. (For instance, a 4-4-2 becomes a 4-2-3-1 as the center mids take a more recessed role to help reinforce the defense and one of the forwards plays back in the hole behind a target striker).

Jonas' return to the side is going to be beneficial, and we will need Good Gaby to show up as well, but more than either of those things, Danny Simpson and Ryan Taylor are going to have to close down the wings. By appearances, Norwich are considerably less comfortable attacking down the middle, and if we can force them inside and Cabaye and whomever starts in place of Cheik Tiote Danny Guthrie can help support whomever gets the nod from Alan Pardew in the middle, we stand a decent shot of keeping the Norwich attack at bay.

On the opposite end of the pitch, Norwich have yet to keep a clean sheet in the league. Similar to Blackpool last year, Norwich City are going to attack. They are not content to just sit back and bunker in and hope. Perhaps we might see some more of the new philosophy of Tim Krul's distribution in attempt to catch Norwich on the counter- with Jonas back the left-throw distribution may bear a little more fruit than it did with Lovenkrands (not that he played poorly, mind, but he's no Spiderman), and Obertan has proven that if he brings his decent pants to the match, he can be a handful for even the top left backs in the league. If.

While the counter may be an attractive proposition, it is probably not the only way to pressure the Canaries. Norwich is happy to give up possession in bunches- they have only held the ball more than their opponents 3 times so far this year, and are near a 40-60 split more often than they are not. If we can hold the ball with patience, move it around and pounce on an opening when it arises (a la Manchester City v. us, say), you have to think that Newcastle will have some goals in them.

It goes without saying that any success that Newcastle might take from this match is going to hinge upon the success of whomever fills in for Saylor and Colo. They are going to need to deal with Steve Morison- the 6' 2" Welshman is going to be a handful for AP's chosen deputies.

Two weeks ago, we would have been expecting to come away from this match with 3 points. Without any disrespect to the Canaries, I don't think that it would be unreasonable for us to expect the same at this point. It does bear saying on the one hand, however, that this is exactly the type of match that the "same old Newcastle" would drop points from. Of course, it does bear saying on the other hand that this team has built it's league position on taking points from matches that it did not take points from last year. This is going to be a tough match, and one that I certainly feel less confident about it today than last Friday. AP is going to put Captain Colo through a last minute fitness test, but if there is any doubt at all, I would really prefer that they not even take Colo on the trip- I'd rather he miss one match now than potentially several matches. At any rate, let's guess what will happen!

Prediction Sure To Be Wrong: