Get the latest Newcastle news with Coming Home Newcastle

For those of us who follow football closely (and even for some of us that don't) the concept of Managerial "Tactics" is one of constant scrutiny and debate. Indeed, more so than any mainstream American sport, soccer is a game where creativity in the moment rests almost squarely on the shoulders of the athletes. Unlike basketball or American football, where coaches "draw up plays," every action in soccer happens in the moment, and set pieces are set well before the start of the game on the training pitch.

This is not to say the Manager of a football team isn't important. For one thing, the Manager serves as both the "GM" and the "Head Coach," a little bit like a Mike Holmgren or a Bill Parcells would in the NFL (although all soccer clubs also have a "coach" that is in charge of training, in Newcastle's case the awesome Steve Stone). They decide what players to bring in, which players to start, and the line-up changes in the moment. The major difference between Football Managers and coaches in other sports is that nearly all of the major decisions happen BEFORE kick-off. Once the game is motion, it is on the players to make things happen. The cornerstone of any managerial decision is based on the "Formation" or the manner in which players line up, and the duties they are expected to perform based on that position. More information, and a possible formation for 2011-12, after the jump.

Nearly every football team in the world defaults to the standard "4-4-2" formation a base, and that has been the case since the 1950's. The strength of the 4-4-2 has increased over the years as midfielders and strikers have become more athletic, as it the squad a perfect well rounded mix of offense and defense. Newcastle, along with most of the Premier League, used the 4-4-2 as it's base in 2010-11, with the following base positions (Newcastle in black): 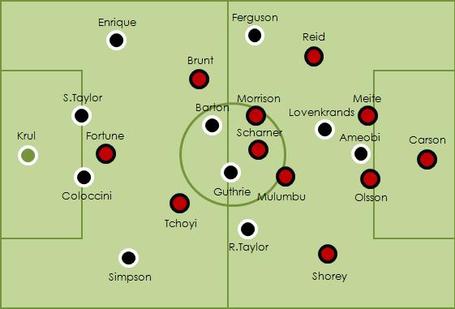 As you can see, all the major areas of the field are well covered, and the formation allows for runs both through the middle and on the flanks. Defensively, the wings (in the example Taylor and Ferguson) can help on the sides, and the midfielders (Barton and Guthrie) can help in the middle. The 4-4-2, as I mentioned, is the base of nearly every team, and it is certainly a nice, well-rounded mix. Pardew leaned heavily on the 4-4-2 with decent results, though he definitely had an eye for experimentation, especially given Newcastle's strengths in certain personnel.

On March 19th, Newcastle was destroyed by Stoke City at Britannia Park, 4-0. One of the major reasons for the folly, especially according to the media, was Pardew's foolish experimentation with a 3-5-2. In this lineup, the central defender (in this case the useless Sol Campbell) is called a "Sweeper" in that their responsibility is to "sweep up" any attack that manages to get through the cluttered mid-field. This sweeper position is of vital importance in any 3 back set, because unlike a 4 or 5 back set, there is absolutely no support from either side. It is essentially 1 on 1 football, and if that defender fails (as Campbell did many a time), then it's up to the keeper to make things right.

Pardew's 3 back set against Stoke was actually a bit more defensive then it looked on the surface, because he used Coloccini and Williamson on either side of Campbell (playing pretty tight), and then for the outside flank of his middle "5" he used Danny Simpson and Jose Enrique, who normally play the right and left side of the "4" respectively. This "Wingback" position is where Enrique really excelled last season, and I believe Pardew saw the opportunity to use Jose in both attack and defense, which was a sound idea. When Jose limped off around the 25 minute mark, the entire plan went flying out of window, and the 4-0 result certainly made Pardew look like a dunce rather than a visionary.

All that being said, I am firm believer that Pardew should look at the 3 back set again this season, though I am actually a firm advocate of the 3-4-2-1 ideology. Egypt ran the formation in the 2010 African Cup of Nations (which they won), and Liverpool has rolled it out a few times. It looks a little something like this: 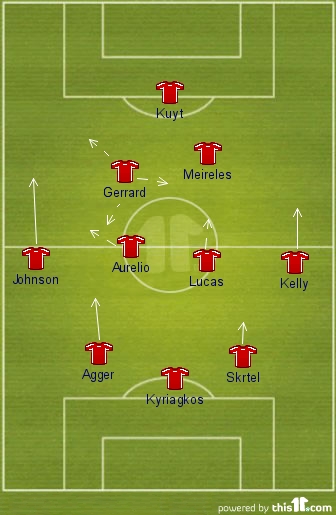 I think even if Pardew doesn't bring in any more fresh faces, this formation can really play to our personnel. Many fans are hesitant to a 3 back set because it certainly does leave the defense a little more porous that we'd otherwise like, but so long as the "back" midfielders are strong defensively (like Tiote, Barton, and Gosling all have proven to be) the Sweeper is rarely left high and dry. If anybody watched the USA-Mexico Gold Cup final, the way Jermaine Jones and Michael Bradley played in the midfield (strong in defense, patiently setting up the attack through Bedoya), is how I envision Tiote and Barton handling their roles. I could see us rolling out a package a bit like this: 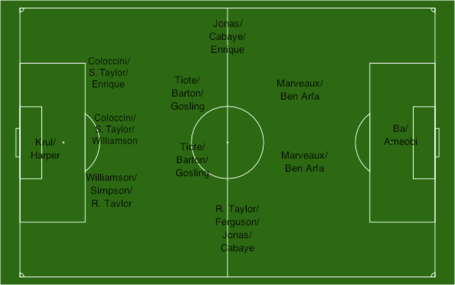 My ideal starting lineup from this set would be: Krul in the net; Coloccini as the sweeper, with the Taylor on his left and Williamson on his right; Enrique as the left wing, Jonas on the right; Tiote and Barton in the back; Marveaux and Ben Arfa in attack, and Ba up front. I personally vouch for Tiote as a new captain, though Pardew has said he will wait till a week before the campaign to bestow the armband and the new #9. 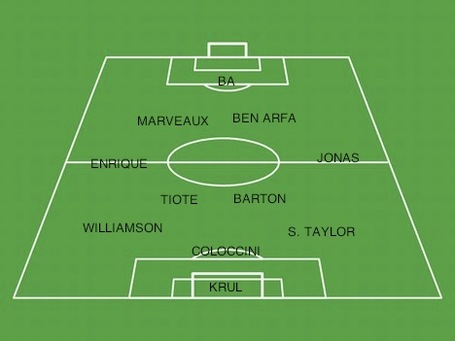 Now, this does take away the awesome "Enrique/Jonas" combo we had on the left, but I think Jonas is actually more comfortable on the right. It also keps Ameobi, Cabaye (who we haven't seen, granted), Gosling, Ferguson, R. Taylor, and Simpson all on the bench. But as Robert always says, if we want to take this team to the next level, we need to have some good players on the bench. I think this formation gives us a solid base of defense while still creating a litany of goal scoring opportunities in spite of the fact that we're limited in the attack. Depth in the front is obviously an issue, but that is going to be the case regardless of the formation unless Pardew brings in the some help.

In spite of the Stoke disaster of 2011, I still believe Newcastle has the personnel to make this work. I'm curious to see what you guys think. Also, consider this an open forum to discuss what you'd like to see in Pardew's "Tatics" for 2011-12. Thanks for reading, I know it was a lot!

This is a submission by one of our readers. Like what you see? Hit the "REC" button.