This is an image of Alan Pardew covering up his mouth as he prepares to vomit.  Not really, but it would be an appropriate image following this evening's debacle in Orlando, Florida. Newcastle were completely embarrassed by a team that isn't even sniffing the first tier of American soccer, and looked completely out of sorts and lost by game's end.  The good, the bad, and the hideous of tonight's comedy of errors following the jump.

I hope you forgive my opening vitriol, but tonight's game really left me with the sinking feeling that I had been violated in some fashion.  This was supposed to be our easy game, our chance to show off, our chance to dance around on American soil flaunting our brilliance and earning scores of adoring fans along the way.  I bombastically predicted in my match preview that the score line would be something like 5-0, and instead we find ourselves at losing end of a horribly disorganized and lackluster effort.

The match began simply enough.  We were playing a simple 4-4-2, with 19 year old James Tavernier getting the start at left back, and Dan Gosling playing in a hybrid wingback position on the right with Ryan Taylor behind him in defense. Tavernier never made much noise, but Gosling had a few breathtaking runs up the side where he would dash towards the middle in support of the attack.  It was definitely an intriguing way to utilize him, but it was most likely just a flash in the pan whilst we wait for Marveaux and HBA to return. 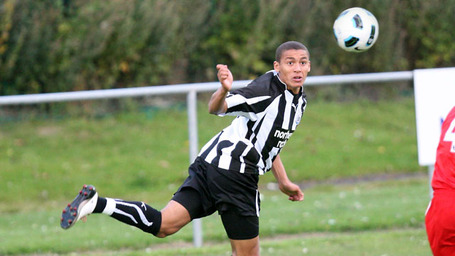 This is a photo of young Mr. Travernier for those of you unfamiliar, and yeah.... this pretty much sums up the night.
via www.nufc.co.uk

The midfield of Newcastle began the match smartly, with Smith and Tiote developing a good chemistry between them and controlling the flow of the game.  Jonas was playing on the left, but he decided to join his friend Peter Lovenkrands in "Invisible Land" for the first half of the game.  We looked disorganized and timid up front, and lacked confidence in the back.  You got the sense watching that the backs and midfielders often thought about brining the ball up to American Rap Sensation Drake (AKA: Leon Best) or Mr. Invisible, but just kind of figured, "What's the point?"

You could sense frustration was growing, especially among our better players like Tiote and Colocinni, by the time the second half began.  We were clearly playing an inferior opponent, had plenty of decent runs, and should have put away at least one or two, but things just weren't clicking.  Then the wheels fell off. 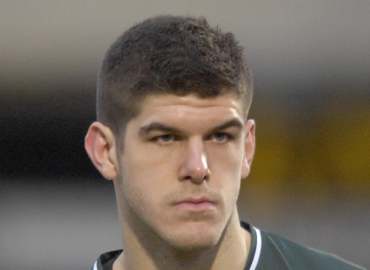 "My name is Fraser Forster, and if you throw another streamer... I will end you."
via www.nufcblog.org

A couple of good Orlando runs resulted in Forster finally being tested.  He had begun the match diving around like a wild man on set pieces, relying on the backs to bail him out (especially Coloccini, who must have felt like a frustrated father back there).  Eventually it proved too much, and around the 70th minute, Orlando finally chipped one past the giant.  Forster was playing well off the line, and S. Taylor was caught out position too close to Colo to recover.

From there, things got ridiculous. A beautiful series of runs by a suddenly desperate Toon resulted in a lovely goal by Harris Vuckic, but in perhaps the most egregious call in American sporting history, the referee ruled him offsides.  Now, I like Vuckic a lot, but to insinuate that the boy can bend the laws of time and space and somehow be both behind all defenders and in front of them is a bit much.  Perhaps it was Orlando's way of showing how much they appreciate Newcastle's visit, by bestowing upon Mr. Harris the power to be in two places at once (if you can't tell, I'm a little bitter).

The final few minutes showed Newcastle looking frustrated, humbled, and down right humiliated.  Yes, it's the preseason, and no, it doesn't matter, but we should have done better than that! This was an opportunity for Newcastle to show an untapped American fan base why they deserve their patronage, and instead they made a USL PRO team look like Chelsea.  Ugh, I'm getting sick just writing about. On to the summaries:

Overall, it was an ugly, ugly night.  I leave you with this image courtesy of Lee Ryder, of a delirious Lions fan who refused to leave the field following their unexpected triumph. 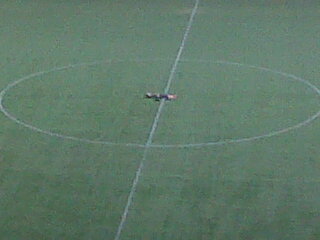