You Can Start Crying Now, Argentina: The State of South American Football and What it Means for NUFC

Share All sharing options for: You Can Start Crying Now, Argentina: The State of South American Football and What it Means for NUFC

The often quipped Portuguese quote above roughly translates to "The English invented it, the Brazilians perfected it." The subject matter, of course, is the beautiful game.  With the Copa America wrapping up last week, the magnifying glass on South American football, and in particular it's young talent, has been ever-present.  The high profile moves and transfer rumors of huge young names like Alexis Sanchez, Lucas, Ganso, Neymer, and Erik Lamela have dominated headlines as the European season prepares to kick off.  Football in South America, while modeled after the European systems, has its own flair, style, controversies, and complications.  A breakdown of South American football, from the national to the club level, and how NUFC could benefit from it, after the jump. (Warning, it features like a billion hyperlinks).

A Spot of History

Following Brazil's victory in the 2002 World Cup, many South American teams went into a state of rebuilding. Though they remained dangerous, and even featured Ronaldinho as the best player in the world, the South Americans simply couldn't deliver in 2006 and 2010, as they took a back to seat to large European teams like Germany, Spain, and Italy.  During this time, however, many younger players, such as Tevez and Sergio Aguero, came up through the South American club systems of the their native countries and eventually demanded huge transfers to Europe, where most have made a considerable splash.  This has made many large European clubs pay much closer attention to the club affairs of these nations, especially Argentina and Brazil.  A little like the Everdivise in Holland, the Brazilian and Argentinian Premeria Divisions have become farming grounds for some incredible break out stars.  While anecdotes like the Messi Napkin Miracle exist, it is much more common for a player to follow the trajectory of say, a Javier Macherano, the Argentina captain who moved from River Plate to Corinthians before eventually settling in the axis of evil at Anfield, then moving to Barcelona once his merits were fully realized.

With that being said, there are a litany of wonder children emerging in the South American landscape.  One need only watch the moves that got Orozco a deal with Wolfsburg:

Or that are apparently sending Neymer closer to what is sure to be a HUGE deal with Real Madrid:

Clearly, South Americans have been paying attention to a certain Mr. Messi, and the emulation of his style is not, in any way, a bad thing for clubs.  The entire situation is a win-win for everyone involved.  South American clubs can cultivate home grown talent to bolster both their ranks and their coffers, and Europe can harvest at will for what are relatively low prices.  It's trickle down economics at it's finest, but it begins with the local stars showing off in their domestic leagues.

Neymar and Orozco are just two of a handful of young stars emerging in the South American front.  Ganso and Lucas seem to be perpetually linked to the biggest clubs in Europe, while Erik Lamela has already moved to Roma in a high profile summer transfer.  Other high profile names include Sergio Araugo and Rogelio Funes Mori, two young Argentine strikers, who are still "up for grabs" by virtue of remaining contracted with their domestic clubs, but there is little doubt they will be making the jump soon.  With River Plate having been relegated last year (which was the South American equivalent of Chelsea falling to the Championship), the asking price for a Funes Mori has to be lowered, but because so many teams are in on the chase, some of the more mid-level European clubs (Newcastle among them) have already been counted out.

UEFA and CONMEBOL: Match made in Heaven

So, where does The Toon fit into all this?  Well, we'll get there, I promise; but first, it's important to contextualize my point with a brief anecdote about Italian Club Udinese.  Udi is a club that has a lot of history, is relatively large, is considered to be a "close, but no cigar" type of club in Italy, and, on top of all that, they sometimes feature a kit with black and white stripes.  Udi finished fourth in Serie A last year, and this coming season will be playing in the UEFA Champions League.  Udi also just scored a beautiful $37MIL fee for the aforementioned Alexis Sanchez, who moved to bolster an already stacked Barcelona squad.  Sanchez was bought by Udi in 2005 for just 3 million.  He made 95 appearances for the squad, scored 20 goals, was instrumental in their fantastic season last year, and just netted them a handsome 34 million dollar turn around.  Not too shabby of an investment.

Udi has another interesting characteristic, in that they are an incredibly diversified team.  While it has become common place to see clubs of Arsenal or Real Madrid caliber rolling out starting XI's with eleven different flags, to see a club like Udi come close, and succeed, is a revelation, one which says a lot about the current global nature of football.  Last year, their starting 11 featured two Chileans, two Columbians, a Swiss, a Moroccan,  a Slovenian, a Ghanian, and only three domestic Italians.  Taking such an eclectic approach allowed Udi to parlay investments into success, and the expanded operations of their scouting program certainly has paid dividends.  Udi certainly won't win the Champions League this year, especially not with Sanchez gone, but they have put themselves in a position for extended success and respect, and that is something which should be both commended and replicated among other mid-level clubs in Europe.

Another note on the South American relationship is the way a certain English club likes to operate.  Manchester United has a somewhat notorious history of buying low and selling exorbitantly high.  Chicarito, for instance, was apparently bought for around 6 Million, and following this past exquisite season, his value is closer to 13 million, with little doubt that it will go up exponentially given the Little Pea's current form. F.C. Porto has also levied this power wonderfully, and Newcastle knows first hand that teams in the French league are following a similar type of system, though Pardew so far has done a great job of finding bargains (whereas Gervinho was probably overpaid for by Wenger and Arsenal, much to the delight of Lille). 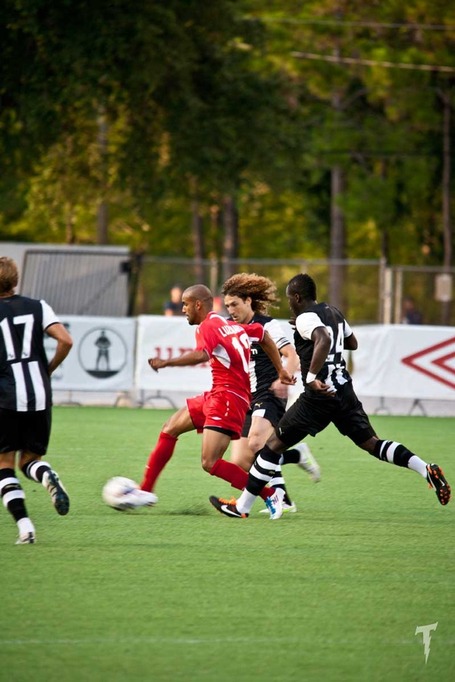 The one with curly hair... he should be more vocal.

I've advocated before for Pardew to search in more eclectic leagues, places like the J-League, the MLS, and of course, the South American competitions.  It has been reported that Tiote and Ben Arfa were monumentally instrumental in bringing Cabaye and Marveaux to the squad on the cheap, bringing on the "French Revolution" and making a welcoming environment in Tyneside for players moving from Ligue 1.  We have two very prominent Argentines in the ranks in Jonas Gutierrez and the curly haired captain himself, Fabricio Coloccini. Ideally, Pardew could levee their influence (as well as Colo's role as captain) to pick up some South Americans on the cheap.

I believe the issues stopping this from happening are two-fold. First, our scouting infrastructure and contractual systems are nowhere near as highly developed as some of the larger clubs in Europe.  Having the structure in place to create a world-wide scouting system is a huge investment, but perhaps with Ashley working diligently to get the club out of debt and fiscally solvent (say what you will about the fat cockney bastard, but we're better off with him than without him, especially as the Fair Play rules come into effect) it is one we can attempt in the next to create in the next few years.  The contractual composition of club relationships is much harder to organize.  Many huge European clubs have feeder programs from domestic squads in "lower leagues," but even Crystal Palace has gotten in on the action with Crystal Palace Baltimore. All that being said, in order for NUFC to diversify further it will take major investments in staffing, infrastructure, and international presence and diplomacy.

The second issue is a cultural one.  The prevailing ideology is that South American players prefer to make jumps to Spain or Portugal first (a fact beautifully played upon by the F.C. Porto, as previously noted) based on the fact that language and culture gaps are far less significant there than they would be in Italy, Germany, France, and of course, England.  Trying to get a foothold in a place where Iberians have dominated for so long is also a difficult bridge to cross, and one that Colo and Jonas know first hand.  Neither standout was recruited by NUFC from their youth, instead following routes similar to Sanchez.

Jonas began at Velez Sarsfield, a pretty successful Argentinian club, before moving to the Spanish island club of Mallorca, and from there was finally recruited by Newcastle in 2008.  Colo's trajectory was comparable, starting with Boca Juniors, then being signed by Italian giants Milan.  To soften that cultural blow, however, he was loaned out his first few years, first back to Argentina with San Lorenzo, then becoming a Spanish journeyman with stints in Alves and Madrid.  He spent one year actually playing in Italy on a loan to Villarreal, then finally made a permanent switch to Spain at Deportivo La Coruna. In August of 2008, soon after the signing of Jonas, Colo signed on the dotted line at Tyneside, and since that time, we haven't signed another South American. 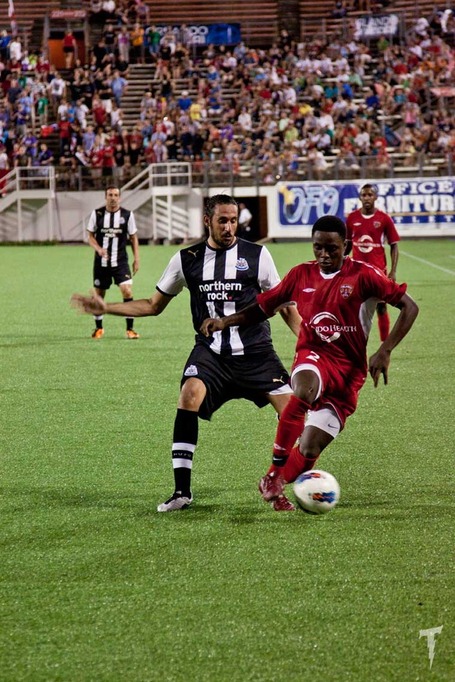 Regardless of their history, the fact of the matter is that Jonas and Colo find themselves here now, with a significant amount of experience and clout within the clubhouse.  They also find themselves at a club which on the precipice of two extremes, one leading to European glory, the other a bloodbath to avoid relegation.  Knowing the ebbs and flows of NUFC, there is little doubt that they won't stay in the middle of the table for long.  They've got to go up or down; that's simply the way the club works.  I believe that Pardew could use these two men to begin digging in South America and start finding standouts like Orozco.  Young Yohandry signed with Wolfsburg, who finished 17th in the Bundesliga last year.  They are not as powerful a club as Newcastle, and yet still managed to snag one of the potentially biggest chips in the future assets market, one that, like Sanchez at Udi, could prove to be huge for the club both on the field and in the wallet.

Pardew's moves in France have been wonderful, but he needs to start looking around the globe if he wants to get Newcastle to the Superclub status that every member of the Toon Army knows is possible given our stadium, fan base, and history.  South America is the perfect breeding ground for raw talent, and it's time that Newcastle developed a pipeline to the Amazon as a smart, relatively surefire future investment.