Share All sharing options for: Newcastle Away Kit Finally Unveiled?

Leaked photos of Newcastle's change kit for 2011-12 have existed on the internet for what feels like forever now (linked to by our own reader Rockets4LIFE a full 18 days ago), but because the club likes to roll their new merchandise out gradually to maximize revenue, there hasn't been an official announcement (also why we haven't reported on it with a story).

There still hasn't been a formal unveiling, but the NUFC Official Online Shop is now taking preorders on the now-familiar orange kit, with a note stating that July 21 is the launch date. The date is a curious one, as the team will likely be traveling from Kansas City to Orlando during the launch. Still, we now know what all three kits will look like, so you can stop hanging onto the edge of your seat now if you'd like. If you can't access the link above for whatever reason, here is a picture of the shirt that will be worn by the outfield players: 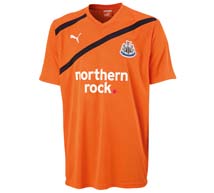 Follow the jump for more on the new away kit, including an image of the goalie shirt and a poll.

The shirt follows the same template of the all-black third kit, making this the second year in a row that the home kit will be the only one sporting vertical stripes. Given Puma's butchering of the stripes on the 2011-12 home kit, it seems that they are trying to push the uniform away from that motif and more towards patterns that are perceived to be more marketable. That's purely speculation of course, but if it's true, it's shameful.

This kit itself is not particularly offensive in my eyes, though I do mourn the lack of cyan in any of the three outfits. (We're obviously fans of it around here.) There will be many who will be quick to note that the Magpies play an away match two days before Halloween, and if the brass aren't wise enough to opt for the third kit on that day, the results will be obviously cringe-inducing. Still, it could be worse, I suppose.

The goalie shirt is even more awful, I'm afraid, as someone took the ill-advised move of applying a stock gradient from Microsoft Office WordArt to a putrid color of green, resulting in something you might see if you took a time machine back to the late 80's or early 90's. 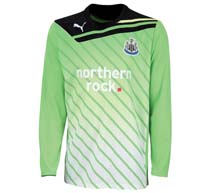 Anyway, vote in the poll. After a while I'll compare the results with that of the polls for home and third kits and report back to you.