Newcastle beat Sunderland 1-0 on Saturday in the first leg of the Tyne-Wear Derby on Ryan Taylor's free kick in the 62nd minute.  The match was contentious, featuring six total yellow cards and a red, as well as 26 total fouls.  The two teams won't meet again until March 3, so bragging rights are retained for another half year.  The Reasonable Reaction Review for this match is after the jump.

If you're new to this blog (or simply need reminding), the purpose of the Reasonable Reaction Review is to wait a day or two to allow reason to overcome emotion in reviewing a match.  Often there is a rush (especially on the internet) to get a match review out as soon as possible to get page views before people move on to the next big thing.  The problem is that there isn't enough time to gain some perspective on the match.  We have a whole week between contests (usually), so why not use that time to let our opinions marinate?

Well, it's nice in theory, but when the match is this huge (dismissive jabs from supporters of Big Four clubs aside), it's hard to separate emotion from a hard-fought win like this one.  I don't know about you, but when I went to work yesterday, I had a spring in my step.  Nothing can take a Derby win away from you.  Nothing.  Scott Wilson of The Northern Echo may have put it best:

It is now one derby win from 15 on Wearside, a dreadful record that stifles any claim to regional supremacy no matter what the two clubs' respective finishing positions might be come next May.

That said, I have managed to temper my enthusiasm here.  It was a great win, no doubt, but let's not delude ourselves into thinking that this team can continue to play the way they did and win more often than not.  Let's take it a step at a time. 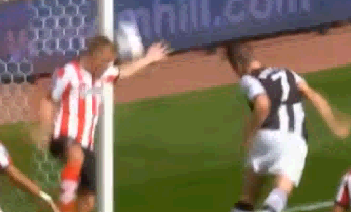 You can see a video of Sebastian Larsson's handball here.

There is little debate that this is a handball.  What is up for question is whether or not Howard Webb or his assistant should have seen it.  When I complained about the lack of action from Webb on Twitter, fellow SBN writer Kevin McCauley replied, saying that it surely would have been a hard call to make, further asking me if I had ever reffed a football game.  The answer is no.*  He's right that I don't understand what it's like to make that call, from the angle he was standing at, in a pressure-packed derby match.  However, my stance on officiating has always been and will always continue to be that the call must be right.  I don't care if FIFA has to utilize video replay, goal line technology, extra officials, whatever - those calls must be correct, regardless of how hard they are to make.  In fact, the harder they are to make, the stronger the impetus should be to make sure that incorrect calls don't happen again.  In any case, I'm doubly glad that Newcastle won this game, because I hate being the bitter guy that's complaining about referees ruining a match.

*However, I used to be a baseball umpire, so I understand what it's like to make calls under pressure, including calls that will change the entire complexion of a game.  I was once barred from calling games at a certain ballpark because I called a visiting player safe at the plate after the catcher dropped the ball (the correct call).  The commissioner of the ballpark, who was also the manager of the home team, was a badly mustachioed "Good Ol' Boy" in the grandest Southern tradition.  When he informed me of his decision to block any of my appointments at his field, he said that he had taken a straw poll of the team's fans and that they had determined that I was a "dirty cheater."  Of course, he also sent me home with some homemade salsa, so the message was sort of mixed.

The lone goal came off of Ryan Taylor's right boot on a direct free kick.  The decision to start Taylor was met with a lot of derision from the fanbase (at least the ones I follow on Twitter, so I guess there's a selection bias here), but it's his value on free kicks - especially close to goal - that will always earn him consideration for selection.  You won't see this one on any highlight videos, but it was well-struck nonetheless.  Simon Mignolet's positioning on the kick was weird.  He was way too close to the front post.  I'm not sure if he was trying to make the far post look inviting to Taylor, if he was worried about the mass of Magpies situated in that half of the box, or if he simply misplayed it.  My inclination is to say the latest, though the others were probably factors as well.

In the Expectations portion of our Match Preview, I wrote that I was counting on a win from the visitors, despite my assessment that Sunderland were probably the better side overall.  Mission accomplished.  Still, I'd have to count this win as exceeding expectations, since Newcastle honestly looked the better side.  Sunderland did have prolonged stretches of domination, but it was mostly a mirage, as they didn't do a whole lot to threaten in the final third. (Only one of their shots on goal came from inside the 18-yard box, and the other shots generated inside the area were either wildly off-target, at extremely odd angles, or both.) With the way the roster is currently constructed (fingers crossed), this team will have to play a grinding, low-scoring style, and they did that effectively.  Mission accomplished indeed.

As I alluded to above, Newcastle were very stout defensively.  That doesn't mean that they didn't allow Sunderland to have possession in the final third - it means that they didn't allow them to have very much effective possession.  The very presence of Yohan Cabaye in the lineup means Cheik Tiote is free to focus on his holding role in midfield without worrying about moving forward.  As a result, Tiote can sit right in the hole in front of Steven Taylor and Fabricio Coloccini.  Since Sunderland has no real aerial threat, they have to rely on diagonal runs and through balls to create chances in the middle of the pitch, and they were unable to crack Newcastle's Bermuda Triangle.  It makes sense, then, that the mackems' two best chances - 1 from Asamoah Gyan and 1 from Stephane Sessegnon - both came from distance.

On the other side of the pitch, Gabriel Obertan caused problems with his pace before fading into obscurity later on in the game.  Jonas Gutierrez spent a lot of time providing support for Ryan Taylor, but when he was able to break forward, his creativity was on full display.  His ability to keep possession in traffic is what won the free kick that Taylor was able to score on.

The same problems remain as before.  Newcastle seem to be incapable of completing crosses, a problem that is just as much a problem with the wingers as it is with the lack of a target man.  That they didn't attempt as many this time around (only 9) speaks to Alan Pardew's willingness to alter the game plan given his personnel, which is surely a positive.  However, without a legitimate playmaker (Yohan Cabaye seems to fit the profile but hasn't produced enough to be considered a threat in this role), the options will be severely limited going forward if the wing play is not sufficiently dangerous.

The wing backs are a problem as well.  Danny Simpson wasn't tested on the day, but Ryan Taylor sure was, and with good reason.

Taylor is a liability on defense, plain and simple.  His positioning was off all game, he flubbed several clearances, and he turned the ball over several times.  The triumvirate of central defense, mentioned earlier, was a massive help, as was Jonas Gutierrez, whose defensive play from the midfield is underrated.  It would be nice not to have to allocate so many resources to defending one area of the pitch.  Ryan Taylor's goal has been celebrated, rightly so, but his play on the day underscored the need for a true left back.

Tim Krul - 8.  Did what the game asked of him, though I feel obligated to complain once again about his distribution.  He only complete 12 of his 28 passes, and 25 of those were punts beyond the midfield stripe.  Shola Ameobi just isn't the type of player that you can count on to retain possession on those kinds of plays.

Danny Simpson - 6. He didn't have a lot to do on defense, and when he supported on the offensive side, seemed more interested in trying to be a hero than playing a team game.

Steven Taylor - 7. Clearances left something to be desired, and he was almost made to pay for his sins once, but otherwise has been the ideal partner for Colo.

Fabricio Coloccini - 8. Basically played his area and Ryan Taylor's, and did both effectively.  I'm proud to have this man as captain.

Ryan Taylor - 6. Gets bonus points for the goal.

Gabriel Obertan - 6. Started strong, but was nothing more than a warm body by the time he was substituted in the 86th minute.  Is match fitness an issue here, or is there something else going on under the surface?

Joey Barton - 7. Basically played box-to-box, though his play in the final third didn't match what was happening everywhere else.  His goalward shot wasn't counted, and I was worried that was going to be a tipping point, but he showed that he does have the ability to keep his composure.

Cheik Tiote - 7. His highs were high and his lows were low.  Still, he was a key figure in weathering the early storm. Also, no bookings!

Yohan Cabaye - 6. His corners were a world's improvement over Barton and he put a spectacular shot on goal.  Still, invisibility is a problem.

Jonas Gutierrez - 8. The absence of Jose Enrique means there's no reason to keep running him out on the left wing.  He's clearly more comfortable crossing with his right foot.  Set him free, Pards.

Shola Ameobi - 7. Missed a couple of decent opportunities.  His presence drew defenders toward him, which is nice.

Mike Williamson (85') - INC.  Nice to see him getting some playing time.

Dan Gosling (86') - INC.  Should have buried that chance at the end.  I expect him to get a full run out at Scunthorpe.