Newcastle United advanced to the third round of the Carling Cup Thursday by defeating League One side Scunthorpe in extra time at Glanford Park. Scunthorpe took the lead in the 18th minute on a Chris Dagnall goal, but Newcastle equalized on a Ryan Taylor free kick in the second half, forcing extra time. Sammy Ameobi provided the game winner on a clean right-footed strike from the edge of the box. The draw for the third round will take place on Saturday.

I came in to this one expecting a win, as did most of the Toon Army. I also expected Scunthorpe to put up a fight. I didn't expect them to dominate the first half. The score headed into halftime was 1-0, but to be honest, it could have been much, much worse. Newcastle were sloppy, unwilling to hold possession, and flat out didn't look motivated. Even the players you can always count on (Fabricio Coloccini, for starters) looked out of it. The Sky Sports pundits at halftime ranted about the club missing Joey Barton and declared that Sylvain Marveaux was the only player displaying any kind of work rate. I was inclined to believe them.

The second half, though, was a different story. It had to be partly Alan Pardew's halftime speech, but substitutes made a big difference as well. Steven Taylor came on for the injured Mike Williamson just before half, and their play was night and day. Williamson was getting abused in the air (how can such a tall guy lose so many headers?), but Taylor stood strong and made several key clearances down the stretch. Similarly, the tide turned when Haris Vuckic and Sammy Ameobi came on for Dan Gosling and Demba Ba, respectively. Ameobi in particular was showing gobs of strength on the ball, and the offense ran through him from the moment he stepped on the pitch. It was like watching everything Shola Ameobi should be.

It should be noted that Tim Krul was fantastic. He made several flying saves (like he does) and really took charge back there, coming off his line more than a couple of times to stop breakaways, a necessary part of the match as the back line was playing very high in an effort to squeeze the pitch while they tried to mount a comeback.

And mount a comeback they did. They dominated possession (I don't have the numbers, but at one point the screen showed 65-35, and the scale continued to tip afterwards) and had tons of opportunities in the box. It was looking like one of those matches where you get mad at all of the missed chances, but then Leon Best put one in the back of the net before he was called offside. 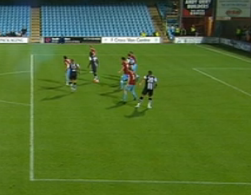 Best looks to be onside when the ball is played through. For perspective, refer to the mowed lines of grass.

No matter though, as it was just a few minutes later when Ryan Taylor stood over a ball just outside the box and hit it over the wall and into the net - again. This time the goalie's positioning was actually sound, but there was nothing he could have done.

Sammy Ameobi added his own bit of magic in extra time to clinch the match. Make no mistake - this was no lucky goal. Sammy did some work tonight, and when he got his chance in the box, he unleashed a powerful and accurate shot past a diving Josh Lillis, and the Toon Army went home satisfied, not only knowing that they have survived to see another day in the League Cup, but also knowing that there's an Ameobi out there that may just wreak some havoc in the Premier League one day.

I'm not going to do another match review on this one, so feel free to share your own player ratings and other thoughts on the match in the comments. Fulham on Sunday!