The hero we need?

Share All sharing options for: Here is Your 4 Word Tyne-Wear Derby Preview

I may be out of line here. Not for the 4 words I'm about to post; I'm fine with that. I've not been a good blog manager recently, and for all I know, Jim is hard at work producing a masterpiece of a match review that will cause you to rend your garments and toss your babies at him because it's so beautiful. I wouldn't know because I haven't sent our customary email.

So yes, what follows is a bit of laziness, but it's also the truth. Additionally, I'm not really interested in a lot of the back-and-forth that happens before this derby. It's an amazing tradition that I certainly respect, and please don't ever question the hatred I have in my heart for The Unwashed. But at this point it's sort of like beating up on your younger brother. Eventually, when he stops putting up a fight, it's not even fun anymore.

Okay, that's not the best analogy: I would love nothing more than a win on Sunday. If your weaker brother takes a swing at you, you're going to put him on his backside. But I'm also not going to be the guy that says, "LOL, look at how obsessed they are with us! Did you see what they said after the Bordeaux match? Haha, they were so awful against Manchester City!!1!!one!" They exist, and for that, I want to beat obliterate them. But I won't obsess.

So, all of that to say: there's one thing we need this Sunday to achieve certain victory. That's right, I'm speaking of the Geordie legend: 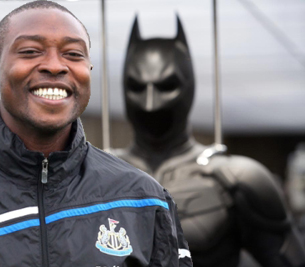