Continuing a look at Newcastle United's struggles for form and consistency, we take a look at the squad-related issues that may contribute to the struggles that we have experienced thus far this year.

Share All sharing options for: Re-Assessing The Toon Part Deux: Injuries and Suspensions

History shows us that we were just fine with the replacement parts that were brought in... but perhaps the most cogent point regarding the start of the 2011-12 season is that we had nearly nothing in terms of injury at the very beginning of the season. It does not seem that we will be in a similar position this year with the likes of Yohan Cabaye, Cheik Tiote and Fabricio Coloccini reportedly already nursing niggling injuries. This may not bode well staring a the 2012-13 Europa League square in the face.

--From the CHN Season Preview

During the pre-season, Alan Pardew fielded so many lineups and fielded players in so many positions that it was easy for the optimist to look at it as blooding young players who were thought to be on the fringe of consistent first team inclusion while figuring out how flexible utility players such as James Perch or Ryan Taylor could potentially be. In actuality, it is not a far leap to assume that The Special One, Jr. did so to try to nurse a lineup that, as noted in the quote above, was already nursing injuries that had the potential to continue rearing their heads once the season started. While you could see these potential injury difficulties on the horizon during the preseason, I think that you would have been hard-pressed to make the case that they would end up being as pervasive as they have become. In fact, the season wouldn't even start off with the preferred starting XI on the pitch.

James Perch, who had attained something of a cult following in the 2011-12 season after a rough start to his career with Newcastle, was Steven Taylor's first starting mate at central defense in the absence of Fabricio Coloccini. The next two matches would see all 5 first-team defenders starting, yet this occurred without the benefit of Cheik Tiote in front of them thanks to an aggravation of his pre-season injury; Vurnon Anita got those two starts and started the "what the hell have we bought" discussions. This brings us up through the draw with Aston Villa, which marked the start of the first International break. Success brings attention, and this particualr break saw the return of Fabricio Coloccini to the Argentina squad and Tim Krul take over the gloves for the Dutch national side. Both would return injured and miss time for their club.

The first match after this international break saw our first attempt at the 4-3-3 formation in the league take the field at Everton, but without many first-team regulars. The starting lineup that day: The injury to Ryan Taylor perhaps influenced this particular match- following Anita's first two matches at DM in which he looked ineffective at best, it is a fair bet that Pardew would have preferred to slide Perchinho into the DM role (which is what he would end up doing and sliding Anita to RB as a mid-match tactical change) and start Ryan Taylor at RB or slide Ryan Taylor in at LB and Santon to RB. It is, of course, immaterial as Ryan Taylor crocked his knee nearly a month earlier in the first leg v. Atromitos in the Europa League, and it is emblematic of the lineup challenges that have presented themselves to the Toon this year. Check this chart of Newcastle's preferred XI and their starts out of 12 possible. 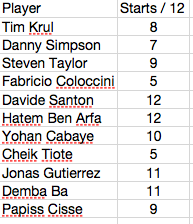 We can see pretty easily here that Newcastle United have lost 33 man starts from their preferred starting lineup. There is a second half of the story that goes corollary to this first table, and that involves the players who have replaced the missing players.

This second table obviously represents only the "defensive" replacements, and that is mostly by design. Out of the 33 man starts lost to the club, only 7 were from "offensive" players (obviously, I'm counting Cheik Tiote as "defensive" and Yohan Cabaye as "offensive", but you didn't really need me to point that out). There is one more breakdown that I wanted to share with you - and that will be represented in the third table:

Interestingly, in the one start that Perch was given in central midfield (where he ended up being switched TO in the matches that Vurnon Anita started at CDM), he was switched to RB in favor or Anita, who'd stopped at RB. The point, though, is that we have seen James Perch start at center back to the tune of 40% of the number of starts that our captain has started at center back. That number may, in fact, have been even closer if Perchinho had not picked up a long-term injury of his own. One more note on these start numbers: We have only been able to start the Steven Taylor - Fabricio Coloccini pairing 3 times in 12 matches.

Here is the difficulty in trying to play the injury card in defense of Newcastle's poor form at the start of this season. All of the players who have started in place of the preferred XI are players that we should be expecting to step into the void in the absence of preferred XI players. All of these players (save Vurnon Anita) either played a major role in last year's success, are a grizzled veteran (Steve Harper) or beat out a player that had played a significant role last year to get the starting nod (Sylvain Marveaux). Whatever you think of him, Mike Williamson has now made 57 Premier League starts for the club. James Perch made 25 appearances in the league last year (13 starts).

When I first started on this particular section, it was my complete thought that I would disprove much influence of the injuries and suspensions (though numerous) on Newcastle's lack of form. It seems, however, that specifically on the defensive end they have taken their toll to some extent. It does not in any way explain Newcastle's struggles in building attack or playing possession football as the players involved in such endeavors have not missed very many matches at all this season.

Next time, in part III - It's The [Offense/Defense], Stupid!

Re-Assessing The Toon After 12 Matches