On The Genius of Alan Pardew: "You don't need to follow me!"

Share All sharing options for: On The Genius of Alan Pardew: "You don't need to follow me!"

I think that we as a community are pretty well on the same page with regard to the "one match is three points" type of reaction, which is reasonable. Granted, some defeats are harder to deal with than others, and some circumstances (such as paying the trip to London to go to the match, say) can exacerbate reactions to a poor performance such as yesterday's. I haven't watched the match, and thankfully it doesn't look like I can. Even without actually viewing the match, I feel that I can take a moment here, peel back a couple of layers on the ol' onion and expose that this match, a 5-0 reverse to a club only two league positions above us at the time of kickoff, is actually yet another example of The Genius of Alan Pardew™. 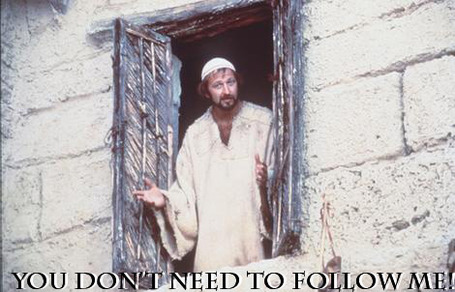 The departure of Fabio Capello from the England manager's job, the two managers in this contest were thrust into the spotlight as potential replacements. The early favorite for the job (on the heels of his exoneration on tax evasion charges) was of course Harry Redknapp. Also getting some shouts, however, was Alan Pardew. In a sense, the Spurs v. Newcastle match on Saturday was a bit of an audition for the England chair. Alan Pardew has been on record early in this process as saying he believes Harry would be a tremendous choice. He was also in a very unique position to try to exert influence in the decision making process. Knowing that he would likely not be the choice for England at this point, Pardew did what any sensible genius would do and actually did everything in his power to make Harry Redknapp look like The Greatest Manager Of All Time. Alan Pardew effectively removed his name from the England discussion, and he did this for his love of the Toon. #AlanPardewLovesTheToon