A largely disappointing derby has been made palatable by the fact that we saved 1 point when a deflating 0 point haul was on the cards. Two hot-button topics came out of this result, one much more a darling of discussion than the other:

For my part of the reaction, I (predictably) come down on the same side that I have done- he was inserted in the second half of a match in which we were struggling for offensive ideas against a defense that was hell-bent on closing the passing lanes as Newcastle approached their box. It was again a ready-made situation for Hatem's propensity for the bit of individual brilliance to shine through as taking the makem D on directly was always going to be the more likely way to beat them, especially leading 1-0. For me, this is a bit of a false positive of sorts. Kudos to Alan Pardew for putting him into situations in which he will succeed, but it also bears remembering that Ben Arfa looked extraordinarily ordinary in the starts he was given as a withdrawn striker earlier in the season. Facilitating Hatem in the starting lineup is going to require a concession in the formation that AP employs. After the jump, a crude suggestion with some explanations. 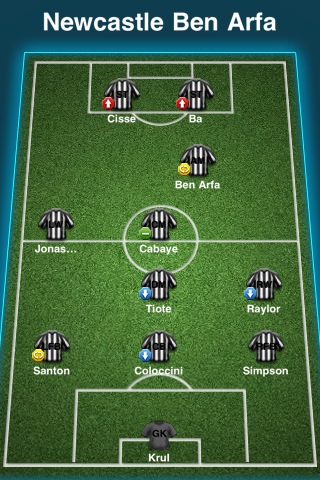 The front line and back 1 is extremely easy to figure- Papiss Cisse, Demba Ba and Tim Krul are musts. I found a lineup app that would allow some flexibility, but did not have available arrows to indicate player movements, so I'll explain what I'm thinking here:

There are notable drawbacks to this, however, not least of which being the fact that running a 3-at-the-back is extremely risky as teams find it easy to get around us with 4 at the back. If Ryan Taylor plays disciplined and resists going forward into the attacking third, this risk is minimized although still a concern.