This preview is written with all good wishes to Fabrice Muamba for continued success in his recovery.

A couple of weeks back, we discussed through the magic of Three Question Thursday the question: "How many points can we realistically take from our remaining 9 matches?" I was probably the most pessimistic of the lot, only coming up with a 15-point haul from the slate in front of us at that time. Here we sit on Easter Sunday, however, with 9 points from our first three matches and 6 matches still remaining. Perhaps I was a little too pessimistic. Not to put the cart before the horse, but I think that 15 points from those 9 matches would be slightly disappointing now. The squad looks to be rounding back into the form that took them off to the undefeated start that sustained us through a little lull in the middle of the season, rating us as one of the in-form teams of 2012.

This is certainly not a match in which either club have nothing to play for- Newcastle United are chasing Europe with afterburners engaged while Bolton have managed to lift themselves above the relegation fray. . . by a single point. Bolton have won three of their last four matches (that's the "numbers" way of ignoring they lost on Saturday) and will be looking to take anything they can from St. James' Park with every single point helping toward the ultimate goal of Premier League survival. Take the jump to see our 5 Point Preview!

Best case scenario for Newcastle would involve something to the tune of a 8th minute strike from Demba Ba... as much to quash what is likely a non-issue (DEMBA DIDN'T CELEBRATE DEMBA'S GOAL RAWR!!!11one!one!1) as to return the smile to Ba's face. I'm not going to lie, but the world seems like a better place when Ba is smiling. Any other variation of Newcastle Take An Early Lead would be great. A listing of other players that I would accept early goals from: Papiss Cisse, Hatem Ben Arfa, Jonas Gutierrez, Yohan Cabaye (if he plays), Danny Guthrie (if he plays), Dan Gosling (if he plays), Ryan Taylor (if he plays), Danny Simpson, James Perch, Mike Williamson, Davide Santon, Tim Krul.
I wasn't one of the people who were bothered by Swansea's huge "advantage" in possession on Saturday, although I could understand why people were bothered. For me, if you're possessing the ball with no end result in sight, you're really serving the greater purpose of running out the clock, and I'm fine with that. Having said that, if Bolton out-possess Newcastle in a similar manner tomorrow, Clubber Lang has a prediction: 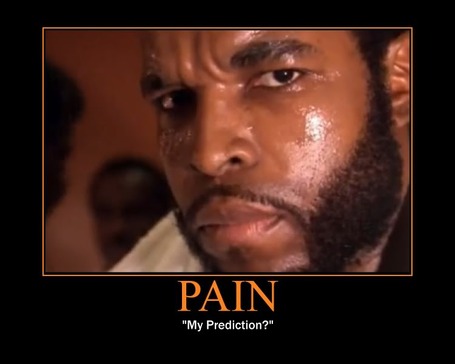 What Will Certainly Not Occur: