Is There Any Real Reason For Mike Ashley To Buy In This Transfer Window? A 2-Deep Look At NUFC's Roster

Share All sharing options for: Is There Any Real Reason For Mike Ashley To Buy In This Transfer Window? A 2-Deep Look At NUFC's Roster

As the season approaches and it appears that there is a very real possibility that Alan Pardew may not have any more to work with this season than what he has currently on hand, I sat around and decided to try to work a 2-deep using the players that are currently ours. The idea was to a) perhaps stimulate a discussion based on who I selected for the two deep and b) to see if we have as many gaps as we feel like we might have.

I really feel like we're going to end up working the 4-3-3 more often than not when we've got our preferred XI available, so I built a 2-deep with that in mind. Then, just for the sake of argument, I rebuilt with a 4-4-2 in mind. While I think there is certain that we might like some different options in some places... I think you can kind of see why Mike Ashley may not, in fact, be feeling highly motivated to acquire players at this point. After the jump, a couple of neat pictures that constitute my 2-deep, and perhaps some more words! 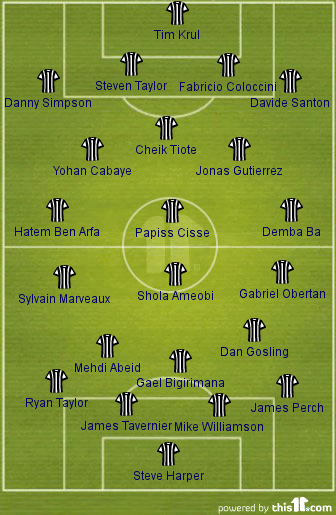 Here's the thing about the squad we have at this point. In almost all 11 positions, we go somewhat comfortably 2 deep, and there are a number of players (Haris Vuckic, Shane Ferguson, etc. and certainly not the least, Sammy Ameobi) that figure to feature at some point for Alan Pardew in either cup competition or "lower level" league matches. There are certainly wishes... perfectly valid wishes, mind you, that you would have. For instance, you would hope that you would not have to rely quite so heavily on James Tavernier this quickly. I think a Douglas/Williamson CB pairing would give most of us a better feeling than a Tav/Willo pairing. James Perch is in a position where he's going to have to constantly re-earn every shred of respect he gets... looking at the lineup, you feel like you might prefer someone new over Perch at RB. But Perchinho was good enough last year. Ryan Taylor is another that you would prefer to not have to rely on at left back (particularly if he is separated from Jonas... a lot of responsibility on Mehdi's shoulders in this formation.)... I might rather try him back into right mid over Gosling if there was a better option... but when you step back and look at it, this 2-deep is good enough. Is there a difference if we slide into a 4-4-2? I'm glad I asked. 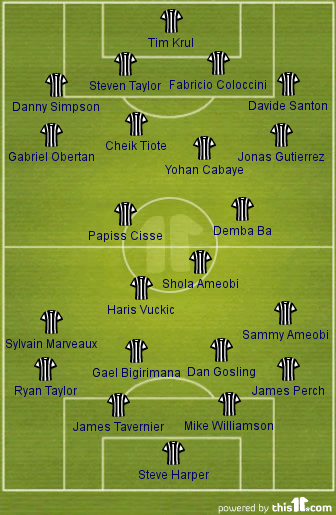 I took a little bit of liberty with the 4-4-2 in the second XI here... if we're being truly honest, another striker would be more than welcome. In the meantime, you have to hope that Shola comes good and that Haris Vuckic pays out on the faith that the club that seem to have in him... perhaps a withdrawn roll behind Shola would be what he needs. That is perhaps the only thing that sticks out immediately that doesn't stick out in the 4-3-3 2-deep... there comes some difficulty regarding what to do with a player like Hatem Ben Arfa. Unless there is a fundamental shift that has occurred within him over the summer, he will not be a good fit as a pure right midfielder. He didn't look good as a behind-the-striker player, either. I suppose you can slide Sammy into the front, drop Haris and slide him in... but I don't think you get the best out of the formation or the players in that situation. Ultimately, though, you're looking at quality players such as Hatem Ben Arfa, Romain Amalfitano, etc. who will struggle to see the pitch in one formation or the other. It is always possible that you suffer a rash of injuries at a position, but you can't really build a squad that would absorb that eventuality in the value-buying manner in which we are run now. If that does happen, we will have to rely on youth- a not altogether unattractive proposition. The players who survived the Great Purge of 2012 as well as the young players that have been brought in over the summer have shown very very well in the preseason. Again, would you rather a Douglas than a Tavernier at CB? Sure you would. Is it relegation panic if you have to play it the other way? It doesn't seem so.