Newcastle United will travel to Goodison Park to take on Everton Monday. Last time these teams met, the Toffees defeated the Toon 3-1 on the last day of the 2011-12 regular season in what could have been (but ultimately wasn't) the match that propelled Newcastle to fourth place and a Champions League berth. After the jump is a 5 point preview.

1 - The Beginning of Fixture Congestion

Monday's match is the first of 5 matches in 13 days for Newcastle. On Thursday they will travel to Portugal for the first match of group play in the Europa League and Saturday will be the emotional return of Chris Hughton and his Norwich City squad to St James' Park. The following week features a League Cup match at Old Trafford followed by a trip to Reading. It's bound to be an exhausting two weeks no matter what happens in this match, but a positive result would no doubt lift the spirits of the players. Jumping out to an early lead becomes even more of an imperative in this match so that Pardew can use his substitutions to rest important players.

2 - An Early Look at the Table

This is the last match of the weekend, meaning most of the other Premier League teams have already played 4 games, while Everton and Newcastle have each played 3. The Toffees sit in 9th place and can jump all the way into 3rd with a win. So much for their characteristic slow start. Meanwhile, Newcastle are in 12th, even with a whole host of teams with 4 points. They need at least a point to stay ahead of the pack, and a win puts them right back into the hunt for Europe. Cliche time: You can't win the league in September, but you can lose it. 2-1-1 looks a whole lot better than 1-2-1 and especially 1-1-2 with a goal differential worse than -1.

As we noted earlier this week, the international break was not kind to the Magpies. Tim Krul and Danny Simpson are out. Fabricio Coloccini and Cheik Tiote are gametime decisions (probably out, if you're a betting man). Long-term injuries to Ryan Taylor, Haris Vuckic, and Shola Ameobi remain. It's almost easier to list the players that are available.

We should see Steve Harper in goal, and while that situation's no ideal, it's the one I'm least worried about. Vurnon Anita will presumably fill in for Tiote, and while I'm not ready to give up on him, he needs to show something soon. The spotlight of shame shone on him brightly after he committed a penalty against Chelsea, which is a shame because he actually performed decently up until that point. Still, it only takes one misstep to turn a good afternoon into a bad one, and until he proves he can play at a high level, I'll be holding my breath whenever he gets a start. The back line gets interesting if Coloccini can't go. Shane Ferguson is said to be fit, so if Alan Pardew feels James Perch is a better bet to play in the middle than Mike Williamson, perhaps Ferguson slots in on the left and Davide Santon moves across to right back. I suspect that Williamson will in fact get the nod, sending Perch to the right. As we're about to see, that may be the most important position on the pitch for Newcastle on Monday.

4 - What Everton Will Try to Do

I'm not trying to slight Marouane Fellaini or any of Everton's other fine players when I say that I believe Leighton Baines is their most dangerous player. I just rate Baines that highly. He's got great instincts as a defender and seems to have the perfect blend of speed and strength, able to deal with just about any winger to come his way. More importantly for this discussion, he controls Everton's offensive game. Last season he had the most touches on the squad (2373, or 10.4% of the entire team's touches. The only other player to come close to this number was Fellaini). As he goes, so goes the team. In Everton's 3 matches so far, they've defeated Manchester United 1-0 and Aston Villa 3-1, while losing to West Bromwich Albion 2-0. In the loss, the Toffees distributed the ball fairly evenly across the pitch, but when Baines and his partner in crime Steven Pienaar dominated the proceedings, they won. Here's the Manchester United match (Everton are left to right here): 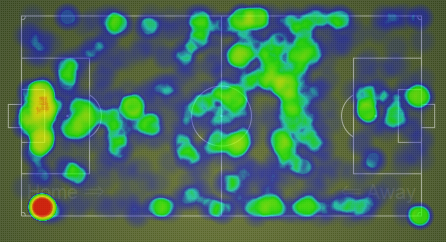 What's interesting about this match is that only 4 of their 18 crosses came from the left side. All that possession on the left caused Manchester United to overcommit to that side, leading to quick outlets and short crosses from the right of the formation.

We saw a similar tactic against Aston Villa, this time with more predictable results (Everton are right to left here): 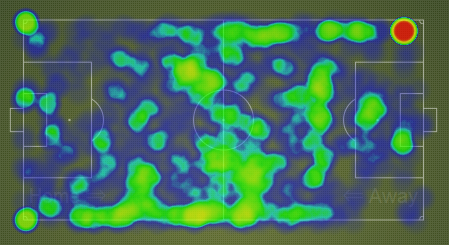 You'll notice that this time around, the Toffees were more successful penetrating the left side, and as a result they bombed several crosses in from deep. They were also very disciplined in playing with width, mostly thanks to Baines, who hugged the touchline all day. This of course stretched the defensive line, making communication a priority. Whenever there was a breakdown, Everton proved they had the firepower to make Villa pay.

5 - How Newcastle Can Counter

This left-handed tendency from Everton puts a premium on the right back position, which is why it's so devastating that Danny Simpson is unavailable. James Perch's rise to prominence over the last calendar year has been well documented, but recall that he was pulled at halftime for ineffectiveness in last season's finale. His substitute? Ryan Taylor. It's tempting to whinge about the lack of squad depth at this point, but let's just focus on what can be done. Last season's misstep aside, Perch is probably the best candidate to replace Simpson, as he has some experience working with Steven Taylor on that side.

Perhaps the best way to limit the influence Baines and Pienaar is to keep them running in their defensive half. On the surface, Hatem Ben Arfa sounds just like what the doctor ordered. However, it's worth noting that he was most effective in Newcastle's lone win against Tottenham Hotspur when he was allowed to roam more freely toward the center of the pitch (and even on the left side). A similar tactic would take Baines out of the equation. If there were ever a week to try switching Ben Arfa and Jonas Gutierrez in a 4-4-2, this would be the one. Jonas' defensive willingness could cover over the deficiencies caused by Simpson's absence, and he certainly possesses the pace and ball skills to keep any fullback on his back foot. Meanwhile, HBA would be free to explore his new role in the formation. Pardew is unlikely to start the match this way, however, and if that's the case, I might suggest inserting the pacy Gabriel Obertan up front with the intention of subbing Ben Arfa on after Squidward has run himself and Baines into the ground.

Statistics via squawka.com and eplindex.co.uk