An open letter, supposedly from Newcastle United captain Fabricio Coloccini to the fans of San Lorenzo has surfaced and has some folks up in arms.

Share All sharing options for: Fabricio Coloccini, An Open Letter and Disbelief

Purportedly sent from Fabricio Coloccini and signed by both himself and his agent, the letter was put out on the twitters by San Lorenzo and then also on their facebook page (which apparently functions as their official club website... times must reaalllllllyyyyy be bad?). Actually, the version on the facebook page was a transcription, not a visual copy of the actual letter while the twitter housed a supposed photo of the letter itself. Understandably, if you take this all at face value, it is very disconcerting to a proud fan base such as the Toon Army. Seeing their captain sending a letter to the fans of a club that honestly expected Newcastle to tear up Coloccini's contract in order to be able to afford to sign him would be a slap in the face.

Is it everything that it seems to be, though? With the only provenance of the letter being San Lorenzo's say-so, I'm skeptical. Let's take a look, in admittedly rudimentary methods, at the letter in question and try to verify or disprove it.

Here is the letter 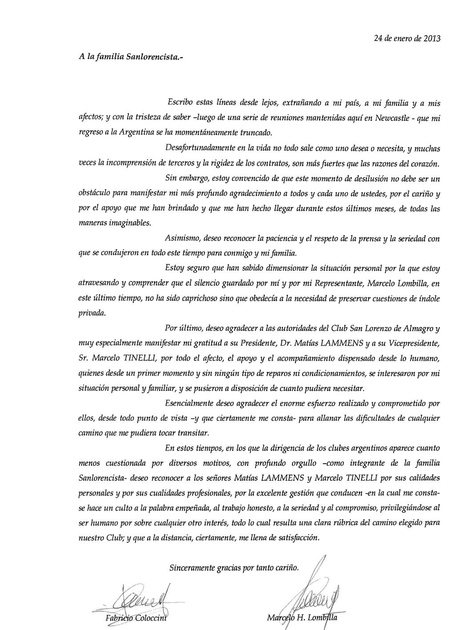 The importance of this letter is not necessarily the wording or translations - I wouldn't know Fabricio Coloccini's writing voice from a hole in the ground. I'm more concerned with the alleged signature. I went online and found a business (www.sportsignings.com) that sells signed photos and jerseys with such provenance as photos of the item being signed or in some cases videos of the items being signed. As I'll not be getting Captain Colo's autograph on my own any time soon, this will have to be good enough for me. Click here for the photo of Coloccini signing and here for his signature.

I accept that I am no handwriting expert, but a couple of things in particular stand out to me when you compare and contrast the signatures. On the "San Lorenzo" letter, there is a prominent cross across the "Coloccini" signature. It goes across the signature in the opposite way than in his signed photo - perhaps this is explained by the presence of an "F" at the beginning of this signature (maybe he uses a truncated signature for signing memorabilia.) However, even if it is a different version of his signature there should be some similarities. In his signed photo, the C in Coloccini is very prominent and well formed. There is no such C in the "San Lorenzo letter". He crosses across his signature from right to left and upward in his signed photo after completing "Coloccini" which is absent completely from the "San Lorenzo letter".

I don't sign my name completely the same every time I have to sign something. There are a handful of features that are consistent enough that you can tell my signature is my signature. Even if you have a truncated signature as a professional athlete, there have got to be some common features between your "sports signature" and your "real signature". There are no discernible similarities between these two examples. Also of interest - look at his agent's "signature"... it's a bunch of looped, unformed letters until it seems like it was long enough and then some sort of ending.

Does any of this prove conclusively that this letter was not written by Captain Colo? Not at all. Is it enough for reasonable doubt? I think so. This alleged letter without a similar letter to Newcastle fans seems completely out of character for Coloccini. Sometimes, if it fails the smell test it just may be a turd. While there is certainly a possibility that this is real, for me it sure fails the smell test.