Massadio Haïdara is the "one for the future" from this transfer class. Like Gaël Bigirimana, however, his time may be sooner rather than later.

Share All sharing options for: Newcastle Player Profile: Getting To Know Massadio Haïdara

Meet Massadio Haïdara, if not the most Premiership-ready player he is certainly the one that has most quickly endeared himself to the Newcastle United Twitterati thanks to this picture which appears to show him in bed in his new Toon jersey (from his verified Twitter account): 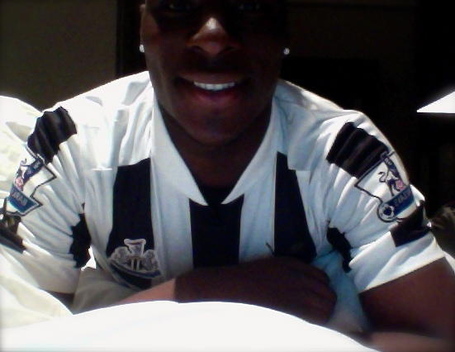 Even if that's not specifically the case, it's made a lot of people really happy already.

Position: Left Fullback
Age: 20
Birth Date: Dec 2, 1992
Height: 1.81m (5' 10")
Weight: 76 kg (168 lb)
Appearances: 43 starts, 3 substitutes, all for AS Nancy
Massadio Haïdara's arrival on Tyneside springs from two major causal factors. Although he would never have known it, Haïdara's journey to Newcastle started right around 12 months ago with the Great Academy Purge of 2012™. The mass release of players who represented nearly an entire generation of failed reserve and/or academy players (Ole Soderberg, Dan Taylor, Jeff Henderson, Ryan Donaldson, Phil Airey and Samuel Adjei to name a few) paved the way for the next generation to take the fore and, ultimately, prove that they are not prepared to fulfill the roles that the squad needed from them to this point. This is the same event that brought about the arrival of Gaël Bigirimana over the summer. While Bigi has shown flashes, he has also at times looked out of his depth... but he does look good value for the reported £1m fee paid to Conventry City for his services. Haïdara is a slightly different proposition in that he is 2 years older than Bigi although the £2m pricetag puts him in the same "expected to perform sooner than later" grouping.
His comparatively extensive starting resume puts expectation for Massadio on the high end of the spectrum as well. Players from Ligue 1 have lately shown an ability to walk straight into a Premier League side and have positive effect (Yohan Cabaye, Olivier Giroud to name a couple), so the 43 starts accumulated in his young career will likely have Haïdara slotting in directly as Davide Santon's backup and ultimate successor.
What will Pardew Do With Massadio?
The potential of Massadio walking straight into the lineup and being able to perform at Premier League level combined with a slight dip in form for Davide Santon (who is only 22, remember) has inspired some to speculate that Haïdara's arrival could free Alan Pardew to field Santon in a pure winger role with Haïdara in at left back straight away. While this idea has some degree of attractiveness if you roll it around in your head just a little bit... it takes a spot away from a position (winger) that the club have purposely shored up in this transfer window with the acquisition of Yoan Gouffran and creates a second new starter (potentially) on a defensive line desperately looking for consistency and form - in other words, somewhat unlikely at least in the short term.
A more likely scenario for Haïdara is that he slots in on the bench as first cover for Santon should he get injured - perhaps garnering some mop-up minutes as a substitute (if we manage to find ourselves in possession of such "mop-up minutes" ever...). Admittedly one for the future you would not, with his experience in Ligue 1, feel like it was an end-of-the-world type scenario if he were to be forced into first-team action.
See Massadio here: