Your Say: Player Ratings versus Sunderland

Spoiler alert....you did not think highly of the performance.

Share All sharing options for: Your Say: Player Ratings versus Sunderland

I suppose this is a bit of rubbing salt in the wound following yesterday's loss to Manchester City, but time to look back on the derby defeat and look at the player ratings. In short, the community was displeased. In all, we received 26 responses. This is down from our past numbers. I'm fairly sure at least one person went through and gave every player a "1". While that may not be fair, the team largely didn't look interested. While Alan Pardew said Newcastle looked to be the better side, you disagreed. I'll supply some charts and analysis, once again broken down by position.

Goal keeper and back line 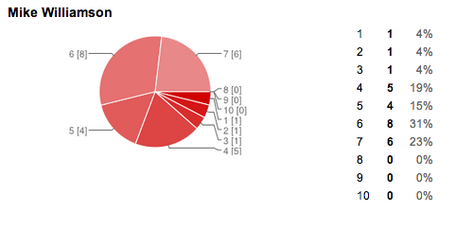 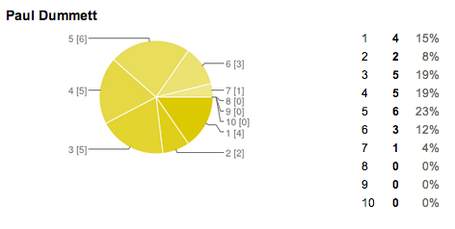 Much has been made of the game Paul Dummett had, as the lad came crashing down to Earth after his breakout performance against Liverpool. Dummett got beat by Fletcher for Sunderland's first goal and looked a little lost. I speculated on today's podcast that it's possible the emotions of the derby kept him frozen a bit. He's young and will get better, but it was not his day. The community was high on Mathieu Debuchy, as he was probably Man of the Match. Scoring a goal will help. Otherwise, it seemed to be a fairly pedestrian day for the back line. 50% of you gave Krul a "6", kind of exemplifying this unit's performance. 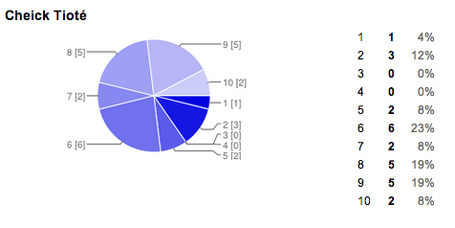 We must talk about Cheick Tiote's performance. Since receiving the captain's armband, he's been an absolute machine in the midfield. He's displayed good leadership an has raised his game. I felt he had a good game on Saturday, and him getting two 10's was not all that surprising. He may have gotten away easily when he wasn't booked for shoving a Sunderland player, but as we've said before he's can talk to the ref now and that seems to be helping. Both Sissoko and Cabaye run the gamut from being rated poorly to having decent games. Cabaye gets a little better rating, as most put him in the 6-7 range, while Sissoko fell into the 5-4 range. Cabaye took his cracks at goal from distance, but that became old in a hurry. I don't feel the midfield did a good job of finding forwards, but then again, the forwards weren't doing the midfield any favors. 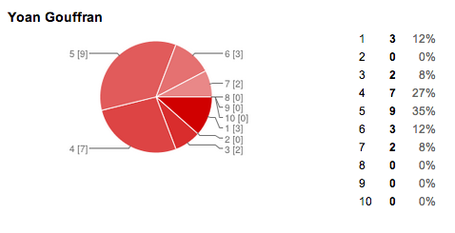 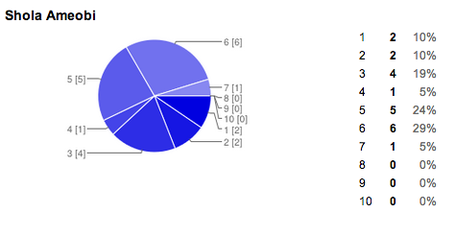 It's very telling when as a unit, each player is rated a "5" most constantly (outside of Sammy Ameobi and Cisse). the forwards were nowhere to be found in this match. Hatem Ben Arfa was often double or triple-teamed and he was dispossessed of the ball. How bad was Ben Arfa's match? Here are two tweets that illustrate how poor his first half was.

Ben Arfa did play better when he moved out to the right hand side and was able to find room. But, he still didn't do anything with it.

Papiss Cisse was left on the bench at the start of this one, but I don't know how much of a difference he would have made. Given his form and the invisibility of the other forwards, I don't think it would be much. He did little to impress when he came on. As noted in Coming Home Newcastle Live, Shola Ameobi had a bigger impact of the match as he came on and whistled a blistering shot just wide. That's part of the reason why he got several sixes and even a seven. I'd be willing to bet that if he'd scored another against Sunderland, we'd have no doubt about who Man of the Match would have been. At any rate, Shola faired better than his brother Sammy, who was one of the more poorly rated players on the day.

Tactics and the such

These three questions are really a referendum on Alan Pardew, and as expected during a derby defeat, it was not well received. The community cared little for the tactics used, and I can't say I disagree with the people who voted for a one (for the record, I do not vote in these). The strategy going in was easily countered by Sunderland and little came in the form of adjustments. Newcastle's use of subs amounted to a whole lot of nothing. As I said above, the forwards disappeared in this match. Nothing was done to give them room. Ben Arfa was moved over too late. There was too much passiveness.

All in all, I don't know if there's much more that can be said other than this was a poor performance from Newcastle all around.