What did the community think of Saturdays game? It was fairly positive.

Share All sharing options for: Player Ratings Results vs. Cardiff

Winning makes for some fairly positive vibes and that was reflected in the player ratings. A lot of high ratings in there. I think I'll break this down by position groups and give my thoughts on them. I'll also include the graphic breakdowns of each player's ratings.

The Back line (and goal keeper)

I'm not sure if this was a result of the constant attack in the second half, or that Cardiff City got a goal in said second half, but the player ratings for the back line were more pedestrian than I thought they might be. Mathieu Debuchy got the highest score, with 23 respondents giving him a 7. The week we talk about Mike Williamson being Mr. Clean Sheet, the team gives a goal, and he was mostly rated as a five or a six (though he did pick a 1). 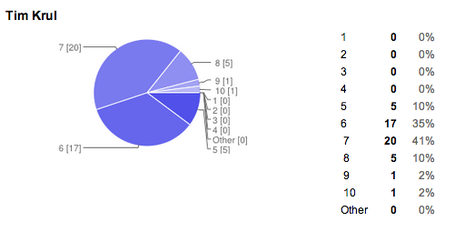 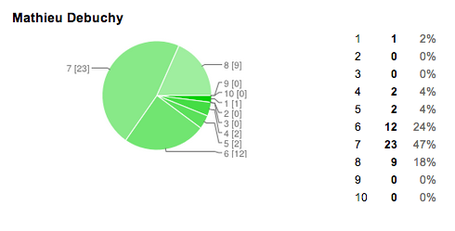 The Community was certainly happy to see Yohan Cabaye back in the line-up. Nearly 60% of respondents rated him as an 8. The community also thought better of Moussa Sissoko, as 23 people rated him a 7 (though his 18 6's brought him down a bit). Cheik Tiote continues to display the "love him or hate him" aspect, as he picked up a 10 and a 1. Both of Newcastle's subs, Hatem Ben Arfa and Jonas Gutierez came on in a midfield role, and I'll include them here. It's hard to get a beat on the subs, but Ben Arfa was thought of as being decidedly average (44% rated him as a 6). I was surprised by this, because I felt that Newcastle possessed the ball much better with HBA on the pitch, and he held the ball well. Jonas was thought of similarly, as you'll see, though one person has something against him and rated him a "1". 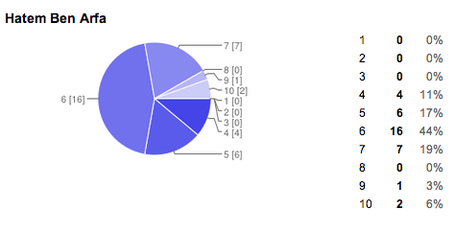 Is there any doubt who the Man of the Match was? The lowest anyone rated Loic Remy was an 8. 9 people thought he had a perfect game. Nearly 60% of the community gave him a 9. With two goals, this was to be expected. Frustrations are growing with Papiss Cisse, as he got 4 1's and was mostly put in the 5-6 range. Yohan Gouffran rated slightly better.

As pedestrian as I thought the back line was, I think they were probably the highest rated group from the Cardiff game. I felt that Newcastle's first half was one of their best defensive efforts of the season. The back line was called upon several times in the second half to keep Cardiff away from a second goal. I thought Alan Pardew's subs were good ones, trading offense for some holding midfielders, though I wonder if they came on a bit to late (Ben Arfa came on at the 86th minute).

This wasn't a perfect game by any stretch of the imagination, but it was enough to get the three points. The community remains high on the team, and would like to see more out of them. Newcastle heads into the international break on a hight note, but with plenty to work on.