Rate the lads after their 1-0 win over Spurs.

Share All sharing options for: Player ratings vs Tottenham Hotspur

Well, what a day for the CHN Editors to all be unavailable for the match. Newcastle bagged an early goal and rode out their defense to a 1-0 win at White Hart Lane. Newcastle now has 3 away wins this year. They had two all of last lear. Against Liverpool, Chelsea and Spurs, Newcastle have picked up seven points.

It has been an odd time.

Remy continued his amazing start to the campaign, netting Newcastle's lone goal on 13'. And then....it was bunkering time.

Alan Pardew noted in his press conference (who I don't know who goes to, as local papers still can't ask questions) that today was different than the Chelsea win. Whereas he felt Newcastle were in control against Chelsea in the second half, Spurs were the dominant side today. Indeed, Tottenham had the lion's share of the possession at 65% And Spurs did something with that possession. They kept Tim Krul busy. How busy? 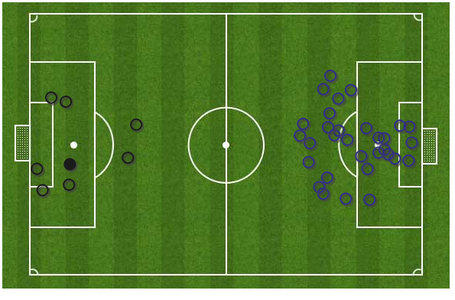 This will surely give Krul, who had struggled this season, a bit of confidence. By all accounts he was stellar today.

But was he Man of the Match? Rate the players below and we'll have a results post late this week.