Newcastle United In Between Corners: What 785 Days of Futility Looks Like

Newcastle United scored from a corner kick for the first time in over 2 years Saturday. Here's a look at what's changed since 1 October 2011.

Newcastle United scored from a corner kick in the second minute of their 2-1 victory over Norwich City Saturday when a Yohan Cabaye in-swinging delivery bounced through the box and met the head of one Loic Remy. It was their first such goal in competitive play since 1 October 2011. Here are some fun facts about the goal:

We asked our Twitter followers to name some things that have happened since the day Demba Ba headed in a corner against Wolverhampton Wanderers. Here are some of the responses:

@ComingHomeNUFC The world didn’t end as per the "Mayan calendar"

@ComingHomeNUFC A guy jumped out of a balloon from Space!

There was a clear winner:

@ComingHomeNUFC that's the day I got married. TRY AND BEAT THAT SOMEONE

Other things that have happened since 1 October 2011:

The counter now starts over at 23 November 2013. If it were to take Newcastle another 785 days to score their next goal from a corner kick, we could expect that goal on 18 January 2016. In the meantime, let us consider whether or not John Ruddy should have gotten to this ball: 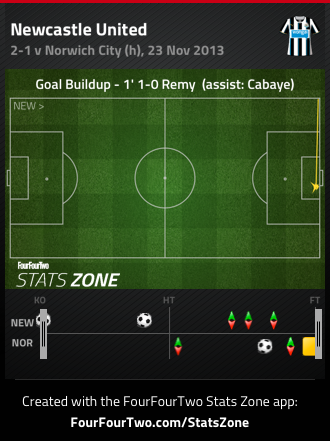